7 things to know about refugee resettlement into the EU

With over 2 million refugees in need of resettlement today, EU countries must act now to meet and expand their resettlement pledges

Refugee resettlement is a tried and tested protection tool, pathway to safety, and means of supporting displaced people and the countries that welcome them. As multiple crises around the world lead to a greater number of displaced people than ever before, it is imperative that EU countries not only honour their existing pledges, but commit to growing and future-proofing their resettlement programmes in the years to come.

In October 2022, EU countries will be reporting their pledges for how many refugees they plan to welcome through this protection pathway in 2023.

The IRC is calling on EU member states to revive and scale up their resettlement pledges for 2023, including resettling at least 40,000 refugees next year from across regions in need, and pledging a minimum of 8,500 additional places for Afghan refugees.

Here are seven reasons why this is so important:

1. Resettlement needs have increased dramatically in the past decade, reaching unprecedented heights in 2023

forcibly displaced as of May 2022

This number represents a record high of 1% of the global population and includes refugees, asylum seekers as well as many millions of people displaced inside their own countries.

Of these 100 million people, 26.3 million are refugees, displaced across borders globally, as of May 2022.

in need of resettlement in 2023

The majority of people in need of resettlement originate from Syria, Afghanistan, the Democratic Republic of the Congo, South Sudan and Myanmar.

Despite these rapidly rising needs and more people being in need of resettlement than ever before, global efforts have failed to keep pace.

EU countries resettled 15,660 refugees - far below its ability and less than 1.1% of global needs.

The increase in the number of displaced people around the world has been rising steeply for the last several years.

The deadly combination of conflict, climate change, the COVID-19 pandemic, and increasing inequality are contributing to these rapidly rising needs, while making it harder for major refugee-hosting countries to welcome and adequately support refugees.

Yet current resettlement efforts by the international community are severely lagging behind needs.

The impact will be most felt by particularly vulnerable refugees, who cannot receive lasting support or access long-term integration in the country where they have sought asylum, or cannot safely return to their homes.

Resettlement is critical to relieve the pressures on countries receiving large numbers of refugees and provide lasting support to refugees in situations of particular vulnerability to enable them to rebuild their lives.

2. The world’s poorest countries have long shouldered the greatest responsibility for hosting refugees

83% of the world’s refugees

are hosted in low and middle-income countries in 2021

60% of these are hosted in countries facing food crises.

Major refugee-hosting countries and regions including Lebanon, Jordan and the Sahel are particularly affected by the increasing food insecurity.

It is very often the neighbouring countries of crisis areas that host the majority of refugees fleeing violence and hardship.

83% of refugees worldwide are hosted by low and middle-income countries, and 27% are hosted by countries accounting for less than 1.3% of the global GDP.

Many of these countries already face difficulties of their own, including conflict or insecurity, economic instability, food insecurity or health crises that limit their ability to provide adequate support and protection to refugees.

The humanitarian consequences of the conflict in Ukraine have only made these situations worse, with food insecurity reaching catastrophic levels due to disrupted grain exports and rising food and fuel prices. Major refugee-hosting countries and regions including Lebanon, Jordan and the Sahel are particularly affected by the increasing food insecurity.

Only three EU countries (Germany, France and Sweden) were among the top thirty refugee-hosting countries, and only Germany was in the top ten.

In the last decade, high-income countries have never hosted more than 19% of refugees.

Despite the rapidly rising number of refugees in need of resettlement globally, resettlement efforts have failed to keep pace. This is partly due to the impacts of the COVID-19 pandemic, which all but brought international travel to a halt and resulted in the lowest resettlement levels in a decade. 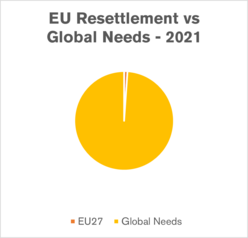 However, while most travel restrictions have now been lifted, global resettlement programmes have yet to resume at their normal scale.

At the current pace, it would take the EU more than 60 years to meet just half of today’s refugee resettlement needs.

While most EU countries have launched some form of resettlement programme since 2015, many have allowed these to shrink or be dismantled since then.

Not all EU countries contribute equally to resettlement. In 2021, 78% of all refugees resettled in the EU arrived in just three countries: Sweden, Germany and France.

Lastly, EU efforts are falling short of states’ own commitments, with annual pledged places often not being honoured in full nor in time.

Member states had pledged to resettle more than 20,000 refugees in 2022. However, as of July, only 7,240 resettled refugees have arrived in the EU - making it likely that these commitments will not be met in time, and that valuable protection places will be wasted. As a result, thousands of refugees who could have been given access to lasting protection will instead remain in limbo.

Europe’s response to the several million refugees fleeing Ukraine has shown that EU countries have the capacity to welcome a far greater number of people in need of international protection, when a political decision is taken to do so.

5. Opportunities for resettlement are not equal among refugee groups and many groups in serious need are overlooked

There are important geographic inequities in the countries from which resettlement to the EU takes place - meaning that this vital protection tool and safe pathway is not equally accessible for refugees in need across regions, and that resettlement places are not always offered to the host countries that need them the most.

resettled in the EU since 2010

Refugees from Afghanistan have the second highest resettlement needs globally for 2023 (14%), with over a quarter of a million Afghan refugees in need of resettlement in Iran and Pakistan alone.

Despite this, only 4,356 Afghan refugees have been resettled to the EU’s 27 member states since 2010.

Most resettlement to EU countries has taken place from Turkey and the Middle East and North Africa (MENA) region, with Syrian refugees being the primary beneficiaries - the nationality with the greatest needs for seven years in a row. However, other nationalities in high need are at risk of being left behind.

Refugees from Afghanistan have the second highest resettlement needs globally for 2023 (14%), with over a quarter of a million Afghan refugees in need of resettlement in Iran and Pakistan alone. Despite this, only 4,356 Afghan refugees have been resettled to the EU’s 27 member states since 2010.

Similarly, there is very limited resettlement to EU countries from the rest of the African continent - the region with greatest refugee resettlement needs and which continues to experience several displacement crises.

In 2019, 660,000 refugees hosted in African countries were in need of resettlement, but only 24,248 resettlement places were offered globally. 77% of these were pledged by countries outside the EU, including the US, Canada and Australia.

Similarly, solutions like Emergency Transit Mechanisms (ETMs), which aim to evacuate vulnerable refugees from Libya to Rwanda and Niger with a view to their onward resettlement or local integration, continue to be under-supported. Only 8,785 asylum seekers and refugees have departed from Libya on direct resettlement and evacuation flights, as well as through complementary pathways including humanitarian visas and family reunification, between 2017 and August 2022.

In Libya, an estimated 2,469 refugees and asylum seekers remain trapped in arbitrary detention in horrific conditions, and others continue to be denied access to services and protection or exposed to human rights violations. Further, UNHCR estimates that 394,600 refugees along the Central Mediterranean Route and Rwanda will be in need of resettlement in 2023.

Long-term solutions and pathways to safety are urgently needed to address these gaps.

6. Everyone wins with resettlement - refugees, countries of first asylum and the countries that welcome them

Every single resettlement place filled by a refugee in need has an immensely positive impact:

However the inverse - delays or failures in upholding resettlement places - has catastrophic and costly consequences, not just for refugees but for countries of first asylum and resettlement countries alike.

Delays and shortfalls result in large numbers of refugees being forced to wait without any certainty as to their futures, which has a severe, negative impact on their lives and wellbeing.

For the countries of first asylum that shoulder the majority of refugees, failures by other countries in upholding their resettlement commitments simply adds to the pressure of hosting people in need, rather than relieving it.

It can also be costly for resettling states. Once resettlement systems are allowed to shrink or be dismantled, it is an expensive, complex and time-consuming process to rebuild them. The IRC witnessed this ourselves in the United States, when severe cuts were made to resettlement programmes during the Trump Administration.

In Europe, important expertise has been secured around resettlement in recent years. Yet, resettlement programmes have faced successive hits, including the suspension of resettlement flights during the COVID-19 pandemic, the Afghanistan emergency in 2021 prompting a focus on urgent evacuations - which however came at the expense of long-term resettlement programmes, and mass displacement from Ukraine contributing to pressure on European reception systems and requiring renewed investment.

Without urgent investment and renewed commitment, lasting and tragic damage could be done to this crucial protection tool and safe pathway.

7. The EU can and should do far more to support refugees in need, starting with ambitious new commitments for 2023

Between now and October 2022, EU countries will be preparing their commitments for how many refugees they will welcome through resettlement next year, with financial support from the European Commission.

In response to the rapidly rising needs, all EU countries should invest into expanding and kickstarting their resettlement programmes and demonstrate true global leadership in upholding refugee protection.

Refugee resettlement: What the EU must do

To provide a lifeline to refugees in situations of particular vulnerability, build on its existing commitments to expanding pathways to protection and demonstrating global solidarity, and maintain credibility as a geopolitical and humanitarian actor, the EU and its member states must:

For more information about refugee resettlement, visit our explainer article.

Help spread the message about the importance of refugee resettlement by sharing our Tweets below:

#KickstartResettlement: As the next pledging cycle kicks off today, we call on EU states to:

* Fulfill their existing pledges to resettle 20,000 refugees this year;
* Commit to resettling at least 40,000 refugees in 2023.https://t.co/j9poDqOFHspic.twitter.com/OiuYG5lZkm

Resettlement is one of the only safe and regular pathways to protection for people coming to Europe, but resettlement programmes around the world urgently need more investment to meet global needs.

Here are 7 things to know about resettlement into the EU: https://t.co/InVR5UQzXDpic.twitter.com/oWuoecW6Bn