9 things to know about the tragedy happening in Syria

Syrians have endured continued violence, deteriorating living conditions, inadequate health care, deteriorating schools and infrastructure, and human rights violations for nearly a decade. Most recently, nearly one million civilians have been uprooted from northwest Syria—the largest displacement since the conflict started in 2011.

As we mark nearly a decade of war, here are nine things to know to help you understand what’s happening in Syria right now:

1. Nearly one million civilians have been uprooted in northwest Syria since last December—equivalent to 11,000 people forced from their homes every day. 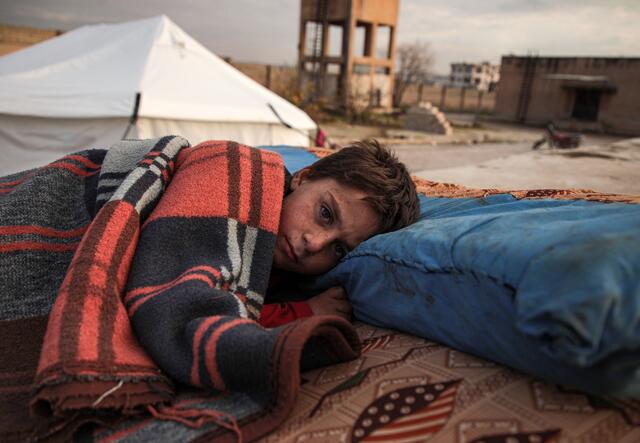 A Syrian child sleeps in the open at a displacement camp near Turkey’s border after fleeing from southern Idlib.
Photo: IRC

Idlib province, in particular, has been the scene of intense fighting as the Syrian government and its allies try to take control of the area. Last year between April and August, more than 400,000 people were forced to flee their homes. Despite a ceasefire, clashes continued and hostilities escalated into December.

As of 1 December, more Syrians have been displaced in a shorter amount of time than ever before, with nowhere left to seek safety. On average, during the last three months, 400 Syrians have fled their homes every hour—as many as 1,800 an hour during the height of the current military operation. The IRC estimates there are at least 400,000 people still in the firing line in southern Idlib.

Watfa, 37, left her Idlib town in May after an airstrike destroyed her house as she was preparing dinner with her uncle, cousin and sister. “We stayed in shelters and basements during the shelling, but it didn’t work,” she says. “It was Ramadan and we wanted to prepare Iftar. When we went [outside], we saw nine planes bombing.”

Nearly a quarter of IRC staff in Idlib have been displaced from their homes. One IRC aid worker uprooted three times by attacks, continues to help thousands of displaced families receive cash assistance to purchase food, tents and other essentials. He recently sent his family to an area outside the war zone.

“When I said goodbye to my children, they were distraught,” he says. “Crying, screaming, clinging to their mother for comfort. It was awful. But you have to remain strong and positive as a parent—even though that’s not how you feel on the inside.”

On 25 February, airstrikes hit an Idlib hospital injuring four health care workers. On 26 January, an IRC-supported ambulance was damaged in an airstrike, and the week before, an entire fleet of IRC-supported ambulances waiting to transport critically wounded civilians had to relocate. In total, 84 health centers operated by the IRC and other humanitarian agencies have had to suspend operations because of the offensive.

Facilities that remain open operate without enough electricity, equipment or medicine. Doctors have double the number of patients they can care for; as one physician  put it, her biggest fear is not being able to treat people who need urgent care.

4. Children are suffering from the psychological effects of war.

Syrian children are showing staggering levels of emotional distress as a direct result of the recent hostilities in northwest Syria. According to an IRC survey conducted in March 2020, 62 percent of parents and caregivers say their children often cry because of the trauma they have experienced or because they fear the sound of airplanes; 47 percent say their children have nightmares or cannot sleep.

“Whenever my youngest hears a plane, he runs into the house and gets under the pillows,” says the father of one 4-year-old. The boy’s reaction is understandable: his house was hit by a missile when he was inside. “He used to look up to the sky, afraid that aircraft could strike anytime. He used to run quickly to the basement whenever he heard them. Recently, he saw a helicopter and screamed to his mom that he wants the basement of our former home so he can hide in it.”

5. Cases of malnutrition among children are rising.

Some 6.5 million Syrians do not have enough food to eat. Last October, over 11 percent of the children under age 5 who visited IRC-supported clinics in Idlib and Aleppo were found to suffer from acute malnutrition; the overall rate of malnutrition in children under 5 across northwest Syria is 4.7 percent. Pregnant and nursing mothers are also vulnerable. According to a recent IRC assessment, mothers who would otherwise breastfeed her infants have resorted to giving them herbal tea because they themselves are malnourished.

6. Idlib was once a place of refuge.

For years, civilians fleeing violence in other parts of Syria came to Idlib for safety. The population before the war was 1.5 million people; it is now 3 million. Nearly all those displaced have now fled to the northwestern region of the province, a small area near the Syria-Turkey border. They are unable to cross into neighboring Turkey, which closed its borders to refugees in 2015.

Khalil, 32, fled to Idlib from Aleppo where he had been a successful lawyer. He remains uncertain about the future. “When we came, it was difficult. Life is hard—there is fear and instability.”

With camps full, many families are sheltering in public buildings such as schools and mosques, even in empty shops and unfinished houses. About 17,000 people are living in the open with no access to basic services. New arrivals cannot find space to put up their tents because the streets have become so crowded.

Nearly 500,000 Syrians have been killed since 2011. The recent violence in Idlib has taken 465 lives in three months. Schools, displacement camps and other shelters have come under attack. On 25 February, 10 schools were hit by shelling and airstrikes, killing 21 people, including nine children. In early March, airstrikes killed 35 people sheltering in a barn.

A ceasefire agreed to by Turkey and Russia went into effect on 6 March. Even if it holds, it will not end the war or the suffering of Syrians. The IRC is calling for all parties to the conflict to commit to the U.N. peace process in Geneva to end the Syrian conflict.

8. The crisis extends beyond Idlib.

Across Syria, 6.2 million people are displaced and 11.7 million need urgent humanitarian assistance. Families lack shelter, food and water, as well as basic services such as education and sanitation. Half of the health facilities in Syria are closed or only partially functional, and more than one in three schools have been damaged or destroyed.

In the northeast, people are still recovering from the consequences of the October 2019 offensive that killed 70 people; 70,000 remain displaced. In Raqqa, Deir-ez-Zour and other towns, ISIS remains a persistent threat and residents remain at risk from shootings and explosions.

The 5.5 million Syrians who have fled to neighboring countries struggle to survive with limited access to affordable health care, education and legal advice. Those who had been approved for resettlement in the United States are now denied entrance to the country as the Trump Administration slashes its quota for refugees: only 563 Syrian refugees were permitted into the U.S in fiscal year 2019; just 320 are expected to arrive in 2020.

Since 2012, the IRC has worked in some of the toughest places in Syria, including Aleppo, Eastern Ghouta, Raqqa and other areas wracked by bombings and sieges, providing health care, education, economic opportunity and specialised support to women and girls and other vulnerable people. 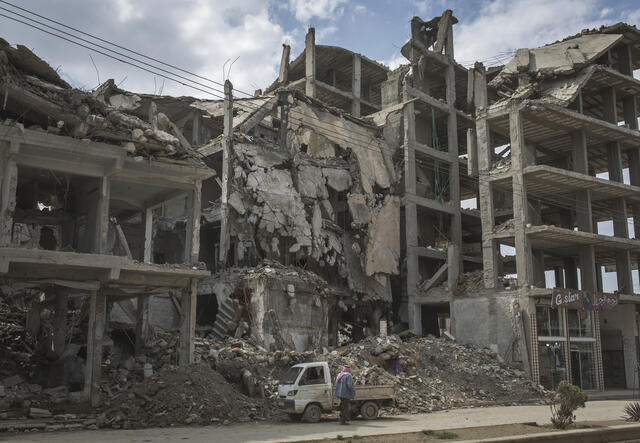 Destroyed buildings in Raqqa governorate. Housing and electricity are limited in Raqqa and the city is littered with unexploded mines.
Photo: Jacob Russell/IRC

9. Here’s how you can help Syrians get through this crisis.

The IRC in Syria

Across Syria, the International Rescue Committee provides lifesaving support to nearly 1 million people—almost half of them children—who are struggling to survive a brutal war. The IRC supports local medical and health facilities and mobile health teams. We also distribute emergency cash to enable the most vulnerable families to buy food, water, and other essentials. The IRC is also partnering with Sesame Workshop on educational programs to help children inside Syria and across the region recover from the crisis and reach their full potential.