“If you want people to become successful, give them respect and worth.”

Ahmad* was forced to leave Afghanistan four years ago with his sister and her young family. Now 30 years old, he’s waiting to receive his residency documents so he can have a real shot at a fresh start in Greece.

Tragically, given the horrors he has witnessed since leaving Afghanistan, these dreams sometimes feel out of his grasp. “There are 1,000 tragedies that I cannot even put into words,” he explains of his experiences in his country, and during his time living in Greek refugee camps.

In the notorious Moria camp on Lesvos, which was destroyed by fires two years ago, he describes how three families would live in a single tent - exposed to the burning summer heat, without air conditioning. He witnessed how hunger and desperation drove people to violence, and sickness was rife. These horrors have taken a significant toll on his mental health.

“People like me – my age – have seen psychological and mental torture from all sides,” he explains. “There’s one pressure from why they fled their country - bombs, the Taliban, Daesh, racial discrimination or gender-based violence. Then they come here and the pain and suffering, instead of becoming less and living like a human, becomes worse. There is more pressure. There is pressure from the government, whether in the asylum procedure or living in the camp, and thousands of other pressures that are on refugees.”

Today Ahmad uses his many languages - including Dari, Farsi and English - to work with the International Rescue Committee (IRC) providing assistance to those seeking to rebuild their lives in Greece by supporting them to navigate the Greek labour market and find a job. 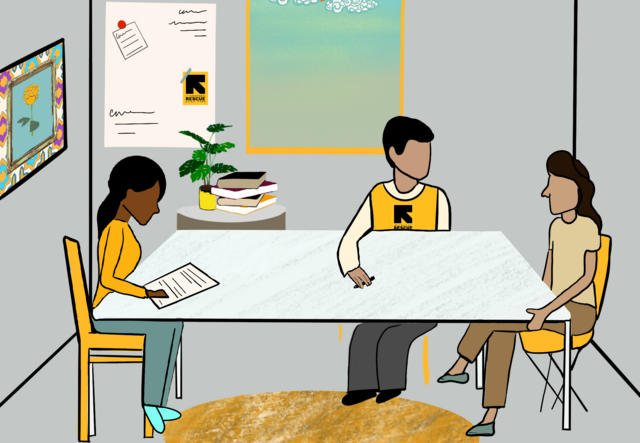 Ahmad uses his many languages - including Dari, Farsi and English - to work with the IRC providing assistance to those seeking to rebuild their lives in Greece by supporting them to navigate the Greek labour market and find a job.
Photo: Sahar Ghorishi for the IRC

When he isn’t helping support refugees, Ahmad plays the waiting game: For 4 years he has been waiting to jumpstart the next phase of his life, but the sluggish workings of Greece’s asylum system have left Ahmad unable to pursue further education or the career he dreams of as a graphic designer. Like many refugees, his life is on hold while the cogs of bureaucracy slowly turn.

For Ahmad, working for the IRC to support refugees isn't just a job to do while he waits for his residency. It's about taking action to help refugees and asylum seekers integrate into Greek society–something that he feels needs more resources from the Greek state:

People who can integrate can stand on their own feet, work and pay taxes .If you want people to reside in this country and become successful, give them respect and worth.

Ahmad sees it as essential for countries like Greece to have durable, long-term pathways in place to help refugees integrate from day one:

“Every person had a profession or art in their home country and they could continue to work in that sector here, whether it’s a mechanic, a motor or car mechanic, construction, whatever it may be. From the beginning people could participate in workshops and then when they go into society they find their way, pay taxes, and this would benefit other people in society too.”

He cites the slow-moving bureaucracy of Greece’s asylum system as an example of something that could be changed.

It took him 3 years to receive his residency status, but by the time the permit was made available to Ahmad, it had already expired and needed to be renewed for another year. It’s been 11 months since he applied for renewal and still nothing. Ahmad has even consulted a lawyer to help speed up the process, but the advice is always the same: Wait and see what happens.

But without a valid permit and ID card, Ahmad is stuck standing still.

“I can’t buy something like a car or motorcycle. I wanted to go take driving lessons, but they said because your ID card has expired you can’t take part in the classes. This is really frustrating - not just for me but for many refugees.

“There are thousands like me who have an expired residency. With this expired ID they cannot open a bank account, work, or buy a SIM card.

“But where is there an ear to listen to all this?”

Living in limbo has given Ahmad a great deal of time to reflect on his situation and the similar plight of countless more refugees whose lives are on hold awaiting processing and decisions by the Greek authorities.

His thoughts? Firstly, the asylum process shouldn't take so long. For many asylum seekers fleeing conflict and persecution, trauma is nothing new. Long application waiting times and the prolonged back and forth following negative decisions can feel like “psychological torture,” according to Ahmad.

Secondly, people whose applications have been rejected need a clear path for the future. Many rejected applicants find themselves tossed back and forth in the system, then abandoned with little hope of securing a stable future for themselves.

Thirdly, all refugees and asylum-seekers should be provided with accommodation until they are able to support themselves.

“They give accommodation, but after four months tell you to leave. I have seen many people kicked out and told to go to the camp,” explains Ahmad.

“Four years of my life have passed. Now my time shouldn’t be wasted. Life is passing by every moment, so we need to take advantage of every moment.”

Ahmad is now eager to start the next phase of his life. He wants to study and pursue his dream career as a graphic designer, as well as experience living elsewhere in Europe.

“I wanted to go to Holland, Germany and learn the language and continue my studies or learn a profession for myself, for my future. Now it is uncertain what will happen.”

Ahmad has family members still stuck in Afghanistan, and his sister lives in Germany with her husband and their child.

So for now Ahmad continues to play the waiting game, putting his hopes and dreams on hold.

* To protect his identity we have used a pseudonym.

IRC Hellas is the International Rescue Committee's presence in Greece, working to help people whose lives and livelihoods are shattered by conflict and disaster, to survive, recover and gain control of their future. Read more about our work in Greece.