Skip to main content
A teenager’s journey to safety

Awaiting a decision for asylum, Parwan learnt the language and cities of Greece and how to build his future

Parwan*, who is 18 and from Bangladesh, has been forced to make his own way through life from a very young age.

His long journey to Greece in search of safety and protection was fraught with dangers. While he’s finally living his dream of working in a pizzeria in Athens, he continues to bear the mental and physical scars from his treacherous journey.

This is his story.

From Bangladesh to Lebanon

At the young age of 11, Parwan left his town of Brahmanbaria in Bangladesh and said goodbye to his mother and two brothers.

Having faced difficulties in Bangladesh, Parwan’s father took the painful decision to separate his family. His wife and two sons would stay at home, while he would move with Parwan to Lebanon - a country he knew well, and where he hoped they could build a better life.

“My father was in Lebanon for many years. He worked and lived there. He wanted to take our whole family, but we had some problems and he couldn’t.”

Parwan and his father lived in Lebanon for four years as the political situation in the country deteriorated. Fearing again for their safety, the pair fled the country, travelling through Syria for a month in 2018 before arriving in Turkey.

“My father is almost 55 and he has many diseases,” says Parwan. “He’s had two heart attacks so it is very difficult for him”. Due to his ill-health, Parwan’s father decided to stay in Turkey. However, he encouraged Parwan to continue onwards towards Greece - a country where he thought his son would have better opportunities.

A perilous journey to Greece

Tragically, the journey to Greece was tougher than Parwan could have imagined.

Alone - at age 15 - he made his way along the forested border between Greece and Turkey. For 20 nightmarish days and nights, Parwan was trapped in the wilderness - struggling through the darkness, barely sleeping, and being bitten by insects.

When he finally crossed into Greece, a civil society organisation supported him through the tricky process of applying for international protection in Thessaloniki.

Like so many others applying for asylum, Parwan was forced to put his life on hold as he began the long wait for a decision - trapped in limbo as a result of the Greek asylum system’s slow bureaucratic processes. When looking back, Parwan recalls how the whole experience left him feeling numb, without any dreams or hopes for the future.

When Parwan turned 17 he moved into one of the IRC’s Supported Independent Living apartments in Athens, for unaccompanied children aged 16 to18.

Moving into the apartment in Athens was a life-changing moment for Parwan. He lived with three other boys, all unaccompanied children on the move like him, who were also waiting for decisions on their asylum applications.

He credits having an amazing IRC social worker who helped him to begin the process of rebuilding his life, including studying and learning new skills. “I met lots of people through the FUTURA programme, and have made friends in Athens from many countries,” he says. “I like everything about Athens. I even like the name Athens!”.

In 2021, Parwan turned 18 and was required to find a new home. But he left the apartments with a support network and skills which enabled him to continue to build a life for himself in Greece.

Parwan today lives in Athens and works at a well-known pizzeria in the city. He loves his job and is passionate about making pizzas. In his spare time, he watches videos of Italian chefs to improve his skills, and hopes to switch his studies from farming to cooking. 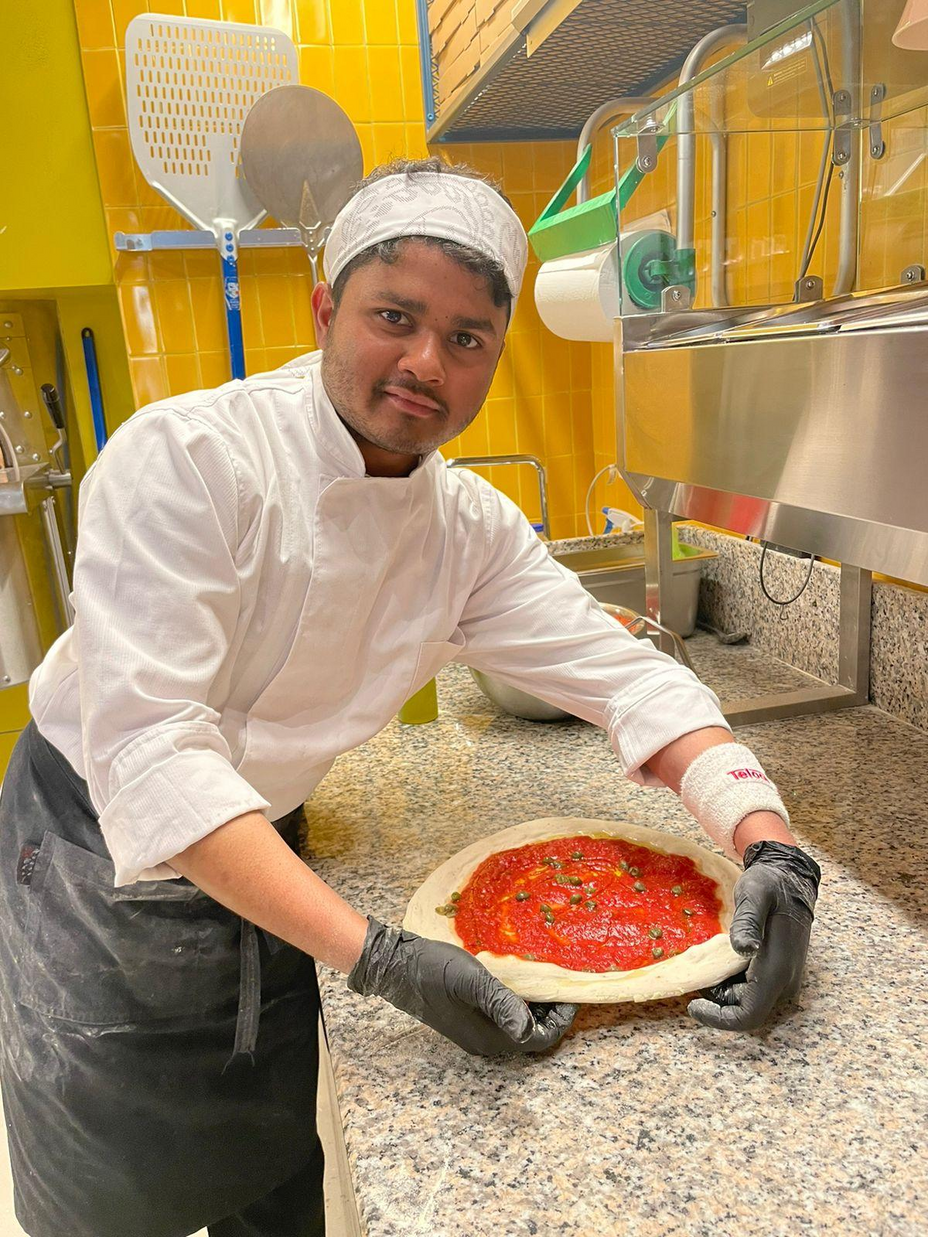 Despite Parwan finally getting his life back on track, he suffers from a medical condition that reminds him of his traumatic journey to Greece everyday.

“The hospital is my second home,” he explains. Medical experts suspect that a bite from a cockroach or another insect during his 20 days trapped in the forest on the Greece-Turkey borders resulted in him contracting an auto-immune disease.

“I have a disease, like allergies with my blood,” he explains. “For three years it has affected my whole body from my head to my toes. My skin is itchy at night. I’ve seen many doctors and am now having special therapy from the hospital…I have to go to the hospital three days a week for phototherapy treatment. Every 15 days I meet doctors who have new advice, new medicines.”

Due to this illness, Parwan’s skin is extremely sensitive to the sun and he must wear long sleeves most of the time - not an easy thing to do during hot Greek summers.

Faced with his medical condition, Parwan has applied to relocate to another EU country. However, Greece feels like home.

“I want to stay in Greece. Now it’s been three years, everything is easier for me. I can go to the hospital, school, and everywhere by myself. I don’t want to change country again - learn a new language, new people, new country, everything new.”

He worries for his family back home and tries to call them two or three times per week. However, this has been difficult recently as the war in Ukraine has had a direct impact on the availability of electricity in Bangladesh.

Despite still awaiting the outcome of his asylum application, Parwan is finally happy.

“I have no big dreams,” he says. “I would just like to buy a bike to go to work. I would go home, go to work, and live by myself. This is a dream for me."

His advice for other unaccompanied young people seeking asylum?

“They should listen to their guardians, coordinator, and social worker who is responsible for them. They know the best way. And keep learning languages! I now speak Greek. I read for some months, but now I can speak it too.”

About the FUTURA project

The FUTURA project (Fostering the Transition of Unaccompanied Children to Adulthood) is an IRC project funded by EEA and Norway Grants that provides accommodation for unaccompanied children between the ages of 16-18 seeking asylum in Greece. Based in Athens, five Supported Independent Living (SIL) apartments provide quality accommodation and individualised support services to 20 children, at any given time, over the course of 33 months.

For more information about the FUTURA project, visit our IRC Hellas page.

*Names have been changed to protect the identity of the person interviewed.