Food vouchers are giving people the dignity of choice

The market in Ténenkou, in the Mopti region of central Mali is a hive of activity as people shop for their groceries. A group of women gather around a blue tarpaulin laid across the dusty floor, examining mounds of onions and garlic bulbs piled alongside a bucket full of green and red chillis. On other stalls lay meat and fish, fresh fruit and vegetables, or staple grains such as dried millet and rice.

The market is a lifeline for local people living in a district where food has become increasingly scarce. Last year, inadequate rainfall and failing crop harvests left 23% of its population unable to meet their basic needs.

But it’s not just damaging weather conditions that are leaving Malians without enough to eat. Since 2012, conflict and political instability has left thousands of people without work and damaged basic services like healthcare, education and water supplies. The violence has caused nearly half a million people to seek safety in neighbouring countries and 330,000 people have been displaced to regions like Mopti.

“Before the conflict, one could move everywhere without fear. With conflict and radicalisation, we risk facing death by moving. The crisis has hit the poor the hardest,” explains 39-year-old mother Fadimata, who is living in Mopti with her family. 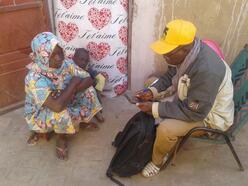 In the Tenenkou district in central Mali, IRC staff assess the needs of people who have been displaced by fighting in the north.
Photo: IRC

To help restore dignity to people like Fasimata, the International Rescue Committee provided vouchers so people can buy their own food. These vouchers, funded by the EU, can be exchanged for food at markets like Ténenkou.

Fadimata appreciates the value of being able to make the decisions for her family’s meals. With ingredients from Ténenkou, Fadimata prepares some of her favourite dishes for her family, such as Fakoye, a traditional dish made from spinach leaves.

“Because the voucher project helps the most vulnerable, we no longer have to depend on other people for food,” she explains, “I now feel a sense of joy and relief.”

As the conflict in Mali continues to tear away people’s freedom of choice, food vouchers go a small way to giving people the chance to make decisions about their lives.