Skip to main content
A teenager's journey to safety

Moving from place to place is not easy, especially for a 16-year-old boy like Hassan

Fleeing Pakistan at a young age, Hassan* faced tremendous obstacles both during his journey and after he arrived in Greece but found solace - and friends - in independent living apartments organised by the IRC in Athens.

This is his story.

Being 16 means very different things for different people. For some it’s the prospect of getting their driving licence. For others, navigating their first love. For many it means figuring out their future and deciding what they want to do in life.

But imagine being 16 and being forced to flee your country - alone - to find a better life for yourself in a foreign land.

This was the experience for Hassan, a young man in Pakistan who, facing tremendous difficulties and pressures at home, made the difficult decision to leave his parents and siblings.

“I could no longer stay in this house, or in this country.”

After travelling through Iran and Iraq, Hassan arrived in Turkey, living without legal status on the streets where he experienced violence and abuse at the hands of both the police and local gangs. Working odd jobs to support himself, one afternoon he was beaten and robbed, leaving him with next to nothing.

Faced with such desperate conditions and without any option to regularise his legal status in Turkey or resettle in Europe, he made the decision to come to Greece using every possible means.

Hassan spent the money he had earned to pay in order to cross the border at Evros. In Greece, he found work in the city of Larissa, where the police helped him to apply for asylum.

While his application was pending, he was sent to a camp in Alexandria for unaccompanied children, where he stayed for nearly four months. At that point he was relocated to Athens to live in one of the IRC’s Supported Independent Living apartments for children on the move in need of protection. 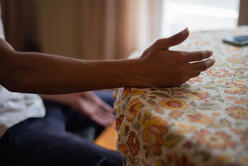 Photo: Stathis Mamalakis for the IRC

Moving from place to place was difficult for Hassan. He would make new friends wherever he went but be forced to leave them when being shuffled around between facilities. And each new place brought a new daily routine to get used to.

“Wherever you go at first, you don't feel very good. It takes a while to adjust.”

At the apartment, Hassan lived with three other unaccompanied children, all of whom received legal aid, psychosocial support and opportunities to learn and build their skills as part of the programme’s goal of teaching the children to feel empowered and self-reliant.

As time passed, Hassan became used to living in the supported independent living apartments. He found support and friends and things were looking up.

Unfortunately, due to funding shortages limiting the amount of time young people can live in the apartments, Hassan had to leave when he turned 18. It felt like leaving his family again.

“I was having a lot of fun and when I found out I had to leave, I found it very difficult. Like when you leave your family - when you change the place you live it makes it hard and you miss your family.”

The difference this time was that, thanks to the support and services provided through the supported independent living programme, Hassan was in a much better place to build a new life for himself in Athens.

He was provided with a social worker, Chara, who helped connect him to additional support and services. This included national registration and tax numbers so he was able to work. He found a job at a supermarket. When not working, he attended classes and started learning Greek.

Throughout all of this, his application for asylum continued to be assessed by the government - a constant source of stress in the back of Hassan’s mind. His fears became reality when his application was rejected.

Hassan’s situation is common for many asylum seekers who arrived in Greece via Turkey. Despite a wealth of accepted evidence to the contrary, the Greek state continues to define Turkey as a safe country. This means people seeking international protection coming via Turkey can legally be returned there, rather than being granted asylum in Greece and becoming a member of Greek society.

Still living without any papers and mindful of his terrible experiences in Turkey, Hassan has reapplied for asylum in order to remain in Greece.

Today, Hassan lives in an apartment and works in a hotel in Athens. He’s enjoying helping to renovate the hotel, in addition to cleaning duties.

Despite waiting anxiously for the outcome of his second asylum application to be decided, he tells the IRC he feels good. However, he is still scared when he sees police on the street - he dreads the thought of something going wrong and ending up in jail or detention for a long time.

While his life is on hold, he dreams of staying in Greece - one day opening his own hair salon so he can support his family back in Pakistan.

“I want to live here in dignity. The only thing I ask from the Greek state is a framework of laws and rules that doesn’t change every three or six months.”

After all he’s been through, Hassan ultimately wants permanency and stability - to contribute to his new community and, finally, live a life without worries.

About the FUTURA project

The FUTURA project (Fostering the Transition of Unaccompanied Children to Adulthood) is an IRC project funded by EEA and Norway Grants that provides accommodation for unaccompanied children between the ages of 16-18 seeking asylum in Greece. Based in Athens, five Supported Independent Living (SIL) apartments provide quality accommodation and individualised support services to 20 children, at any given time, over the course of 33 months.

For more information about the FUTURA project, visit our IRC Hellas page. To read more about our work in Greece, click here.

* Names have been changed to protect the identity of the person interviewed.