Since the war in Ukraine broke out in February of 2022, the International Rescue Committee (IRC) has partnered with local organisations in Poland, Ukraine and Moldova to ensure we reach communities with the services they need the most.

One of those partners is Migam, a Polish company that offers 24/7 video interpretation and assistance to refugees who are among the 72 million members of the Deaf community who use sign language. Since opening the programme in early March, Migam has provided over 9,100 sign language interpretations, adding up to more than 1,214 hours.

Oleksii Zelinskyi, 33 and Deaf himself, and Roman Zadaniuk, 47, are both interpreters at Migam assisting refugees with everything from day-to-day tasks to complex legal and healthcare matters. Below, they describe their work and the challenges faced by Deaf people forced to flee Ukraine.

Editor’s note: Roman’s interview was originally conducted in Polish and Oleksii’s in Ukrainian sign language. Both interviews have been edited and condensed for clarity.

How did you get started with this work?

Oleksii: I knew I was in a unique situation, as a Ukrainian and Polish sign language interpreter, to be able to help Deaf people fleeing war in my homeland. I came to Migam at the beginning of the war in Ukraine and have been assisting Deaf refugees with interpretations since. 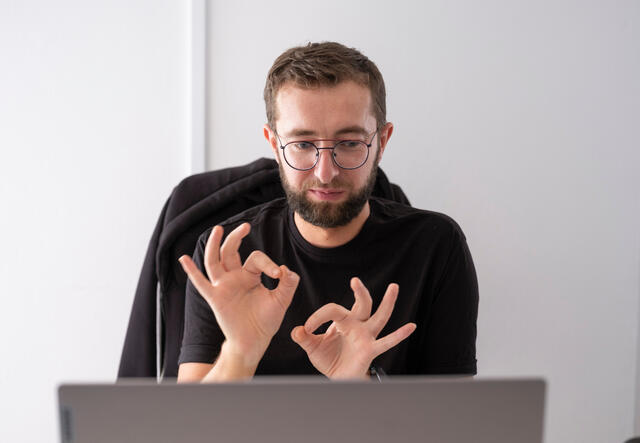 Roman: Prior to the war, I helped a friend who was a police officer interpret sign language. He suggested I search for organizations that needed help with interpreting Ukrainian sign language, though there wasn’t a huge need until the war broke out. Once the conflict began, Migam asked me to join them and I have been working with them since.

How does the war affect Deaf people in Ukraine?

Oleksii: The war has brought challenges to Deaf people, for instance, we cannot hear the sound of air raid sirens. In February, I heard about a Deaf girl who was asleep and did not hear the sirens. When her mother tried to wake her the girl couldn’t believe what was happening.

Ukraine’s Deaf community is at risk of missing life-saving alarms and does not have the same access to some reports or warnings that the hearing community has.

Roman: I have been on a video call with a Deaf friend, out shopping in Ukraine when the alarms began. He couldn’t hear them and I had to tell him to find shelter! 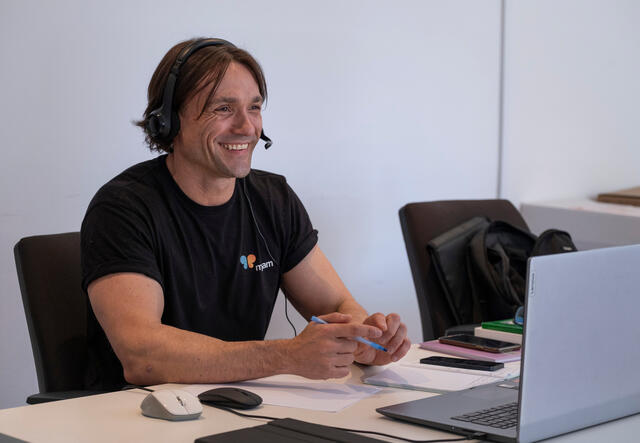 Roman takes a call at the Migam office in Poland. After assisting with an interpretation he explains, "The most important part of my job is ensuring that Deaf Ukrainian refugees are heard."
Photo: Karolina Jonderko for the IRC

There was another instance where a Deaf couple decided to flee the city of Kherson with their two kids. The Ukrainian government had forbidden anyone from leaving the city as Russian forces had surrounded it but the parents missed the information due to their hearing loss. They left under bombing and made it peacefully to Switzerland, thank god.

What challenges do Deaf Ukrainian refugees face when arriving in Poland?

Oleksii: Deaf people have been in a state of shock since the beginning of the war in Ukraine and many have had to flee to new countries where they are put in tough situations. A lot of Deaf Ukrainian refugees struggle to understand new local cultures, laws and how to care for their essential needs after being displaced. The Poles have been very helpful in setting up organisations to help but volunteers have been very busy.

Roman: When Deaf refugees are crossing the border, there are a lot of difficulties communicating with volunteers or officials. Now, many Deaf Ukrainian refugees have gained a little stability in Poland but still need help with daily tasks. For example, they may need assistance with enrolling children in schools and other day-to-day tasks such as attending healthcare appointments or communicating at banks.

Deaf refugees have to cope with double stress; the stress of fleeing war and the stress that they will not understand or be understood.

Oleksii: Migam helps provide Deaf Ukrainian refugees with interpretations concerning various issues on a 24/7 basis. Sometimes we help them with searching for work or accommodation. These are not easy issues, but we work to solve them step by step.

Roman: We help interpret a variety of tasks. For example, we have witnessed the births of twelve children to Deaf parents. We helped interpret consultations with gynecologists and both pre and post-natal care for these families.

Once a Deaf Ukrainian refugee came to us after searching for his wife for more than two days. An ambulance had been called for his wife and took her away to a hospital where she had an operation. Since she had not yet been registered as a refugee in Poland, the hospital had no official record of her. After he contacted Migam, our whole team sprung into action and we were able to reunite the couple.

How do you feel about your work with Migam?

Oleksii: I want to continue to work for the Migam interpreters team. For us assisting Deaf Ukrainian refugees is both important and valuable. I get a lot of satisfaction from my work.

Roman: When a conversation begins, you never know what to expect. However, in the course of the conversation, you begin to unravel some problems and you can see a Deaf person, with no knowledge of the Polish spoken or sign languages, begin to smile. The most important thing is ensuring that the person is heard. This makes us happy.

Is there anything you want to say to the hearing community?

Oleksii: I want those of you who hear well but do not know sign language to learn it. The Deaf community will welcome this with joy. Deaf refugees cannot live a full life and integrate without our help.

Roman: I would remind them that there are people who can’t hear and to be more attentive to Deaf people. Many people lose their ability to hear or speak with time; deafness can affect any person. We all have to remember to be open and helpful.

The IRC’s partnership with Migam has allowed the organisation to expand its services and hire new interpreters to assist Deaf Ukrainian refugees seeking shelter in Poland.

Learn more about the IRC response to the crisis in Ukraine.

Donate to help the IRC provide food, medical care and emergency supplies to people affected by devastating humanitarian crises around the world.