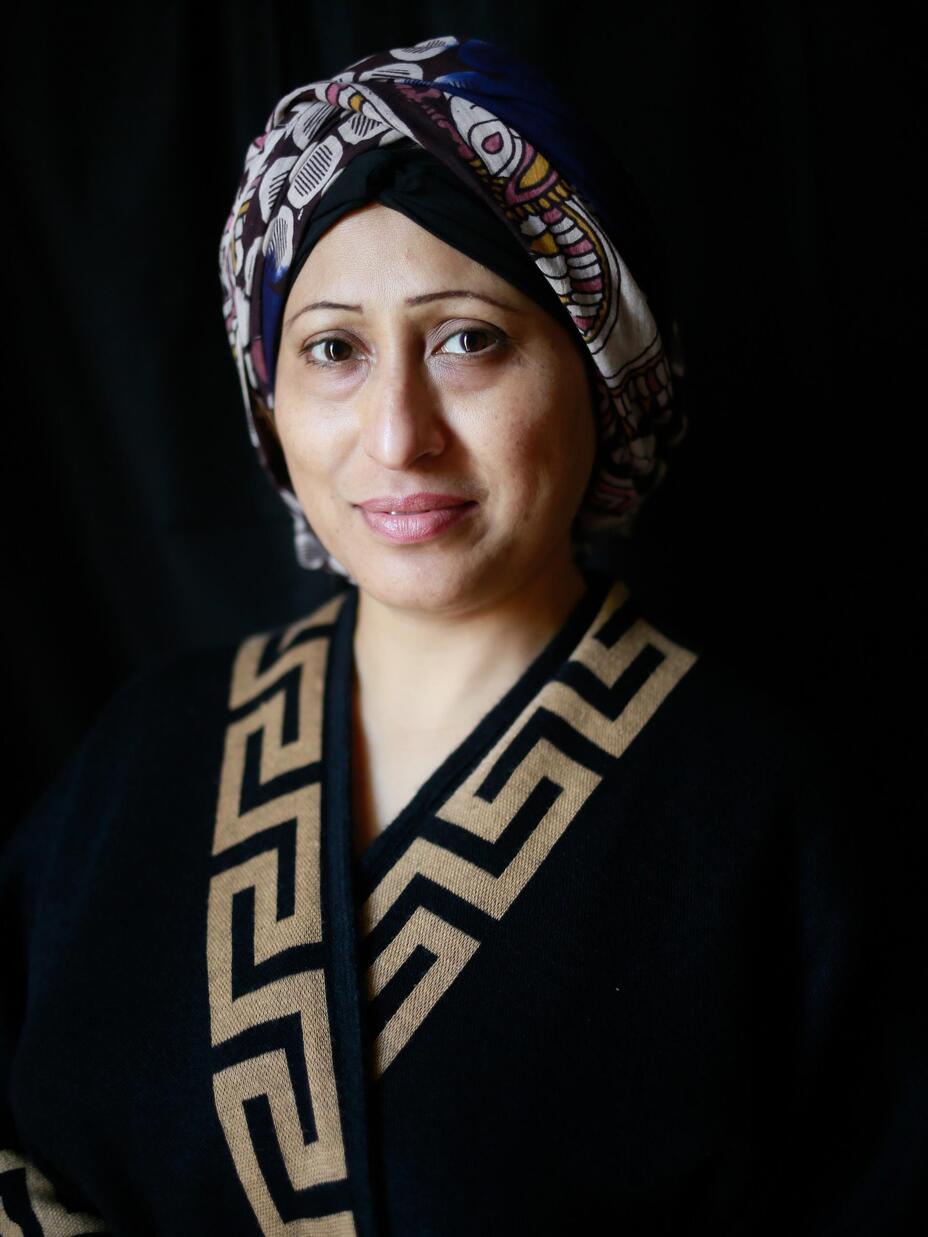 Razia Sultana has dedicated her life to raising up the voices of Rohingya women.
Photo: Habiba Nowrose/IRC

Razia, 47, is an independent Rohingya activist who has dedicated her life to supporting women in her community. She was born in Myanmar, where Rohingya Muslims have been persecuted for decades. Her parents moved to Chittagong, a city in Bangladesh near the border, when she was a baby.

First training as a teacher and then as a lawyer, Razia spent 20 years advocating for Rohingya women in her community whilst working. But in 2017, her life “turned wholly” and she gave up her law and teaching professions and dedicated herself to activism full-time. 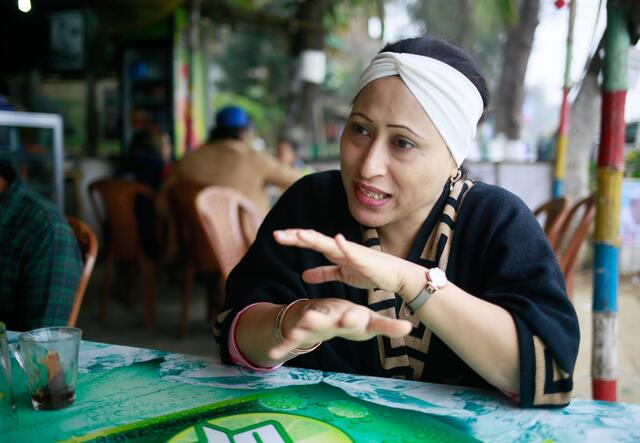 Razia trained as a lawyer and a teacher, but in 2017, her life turned upside down and she started doing activism full-time.
Photo: Habiba Nowrose/IRC 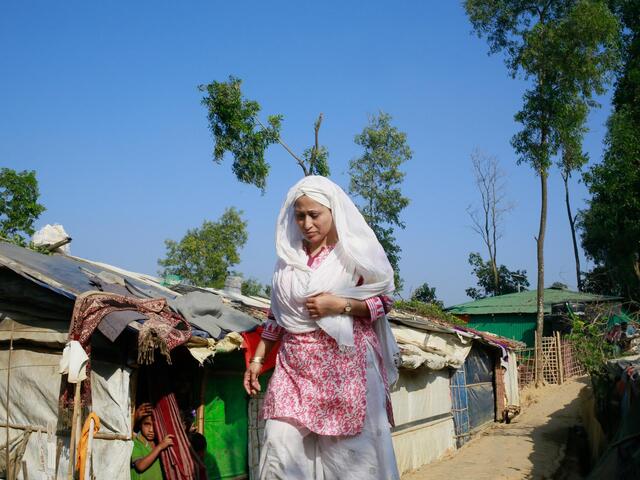 Close to a million Rohingya people are now living in sprawling camps in Bangladesh, Razia goes out into the community to raise awareness about women’s rights.
Photo: Habiba Nowrose/IRC

“More than 300 villages burned down overnight, just like a massacre,” Razia explains. “People fought for their life, they jumped the border, crossed the Myanmar river and took shelter in Bangladesh. Everywhere, there were Rohingya people – in the road, in the field, in the river. I was there, it was like a disaster – people didn’t have anywhere to stay or any food. People in Bangladesh personally came and helped these people. After one week, Bangladesh officially opened the border and gave them shelter.”

Razia began reaching out to the women to hear their stories and understand the situation. “I interviewed the women and I realised they’d not only lost their family, they’d also been raped. It was shocking, that first time.” 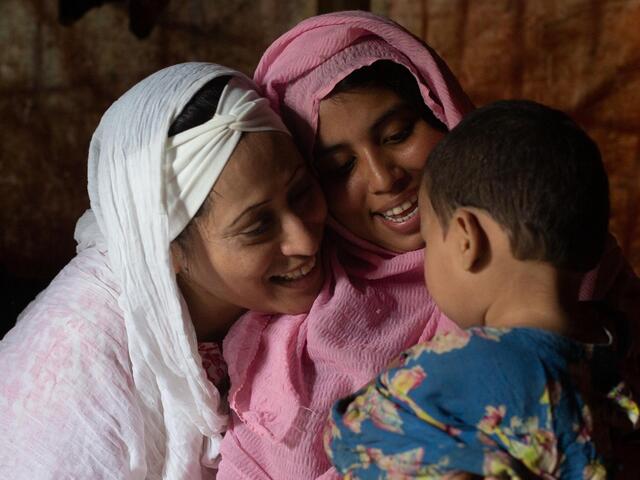 In 2017, Razia started documenting the stories of women who had fled Myanmar, she was shocked by what she heard.
Photo: Habiba Nowrose/IRC

She documented thousands of accounts from Rohingya women about what they’d been through.

In April 2017, Razia became the first Rohingya person to speak at the UN Security Council. “I was nervous, because it was a very big opportunity for me. But I felt I had to tell [what was happening] as a Rohingya myself. I described the situation inside the camp and what is happening in Myanmar. Everyone was shocked when I said ‘The security council has failed’. I felt so good I could say the truth: this is an issue about sexual violence, about violence against women.” 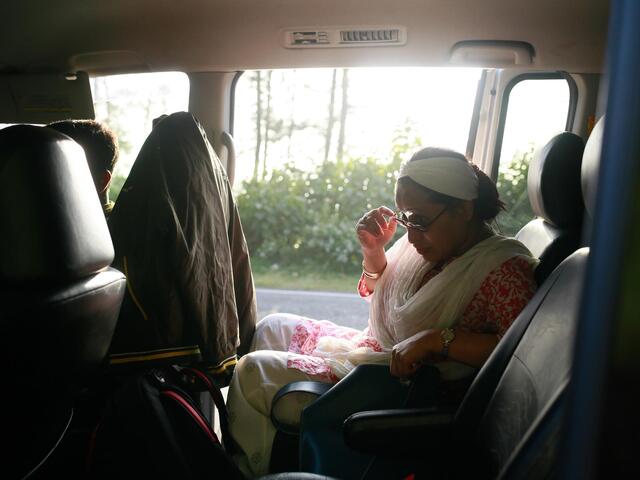 Razia travels around the world doing activism for Rohingya women, but she always makes sure she goes back to the camps in Bangladesh to ensure she’s continually hearing from the women themselves.
Photo: Habiba Nowrose/IRC

Thousands of Rohingya people are now living in the world’s biggest refugee camp near Cox’s Bazar, a town that’s a famous holiday destination in Bangladesh. Two hour’s drive away from the theme parks and luxury hotels is the sprawling camp of Kutupalong.

Bamboo houses coat the hills like a wave. It’s a maze of narrow paths, winding between the different shelters barely hip-width apart. “No refugee camp is a life for people – it’s like a detention. The camp is not secure, especially for the young girls, it’s a crowded place, there is no space to stand. Any time, any moment, girls can be harassed. One woman told me that in the night she tied her daughters leg to hers with a rope [so she didn’t get kidnapped]. Most of the women, they are just stuck in their own shelter, too many are facing domestic violence and discrimination.”

No refugee camp is a life for people – it’s like a detention. 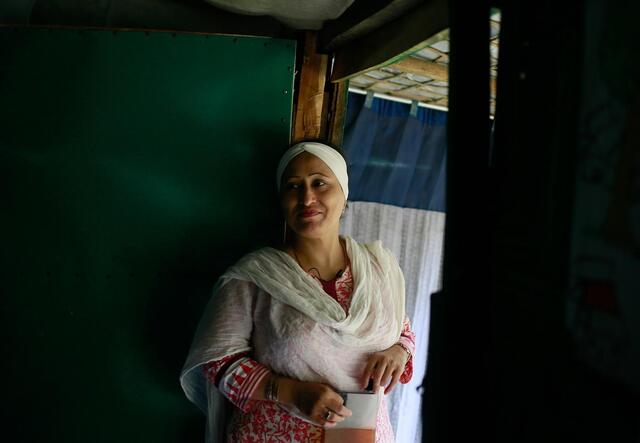 Razia looks on at Rohingya women inside her women’s centre, which she set up to help fight violence and discrimination against women in the camp.
Photo: Habiba Nowrose/IRC

Razia started funding her own women’s centre to help promote women’s rights and end violence in the camp. “When I started working with women, the community-level people didn’t allow them to come in my centre. They say I’m harmful for the religion and I grow women’s confidence against the men. I try to make them understand that women are humans, they have rights. So it’s very hard to overcome, but slowly they’re understanding that I’m not doing anything wrong.”

I try to make them understand that women are humans, they have rights. 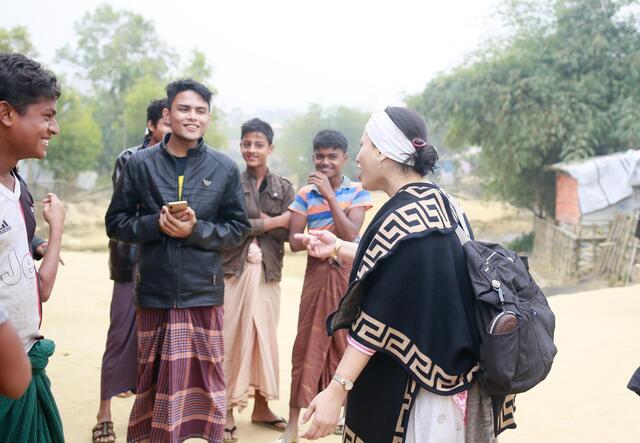 Razia counsels both men and women about the importance of women’s rights, she’s faced backlash from some people in the community - but has persevered and is slowly changing minds.
Photo: Habiba Nowrose/IRC

“Women are always discriminated against for everything, they grow up thinking they have no rights,” Razia continues. “Conservative, narrow minds make men think girls are an asset for men. They want to dominate the girls. This is the fact. The shame means the girls are not sharing anything, they know they will not get justice and the man will not get punishment.”

Rohingya women's rights activist Razia runs sessions with Rohingya women that encourage them to think about their rights and worth. Here she stands side-by-side with them after working on what messages they’d like to send to the community.
Photo: Habiba Nowrose/IRC

Razia looks reflective as she recalls one girl she’s supported. “One rape victim, she tried two times [to die by] suicide. I asked her ‘Why did you try to do that?’ She said: ‘People know and they try to avoid me and I feel ashamed.’ I say it’s not your fault, it’s the fault of the society. I counsel the community also. It’s their responsibility to save these girls.”

Razia grew a network in the camp with ADI (Asian Dignity Initiative) funded by Koica, initially training up four Rohingya women to go out into the community to spread the word. “In four months, suddenly, like a boom, women are coming. I now have 120 volunteers, they can reach more than 3,000 women.”

Her impact can be felt as she walks around the camp. A ripple of excitement flows with her as she goes door-to-door to visit families and is gets greeted with arms outstretched.

Razia says her motivations to support women come from Mother Theresa, her own mother and the head-teacher at her school. “She controlled the biggest school in Chittagong. She never let anyone dominate her. My god, when I remember her face… My god, she was a symbol of a courageous woman,” Razia says. “My mother was always helping women – always the women, she was the perfect Rohingya woman.”

But it is Razia who Rohingya women living in the camp look up to. “People are coming to me and telling me: ’Please, I want my girl to be like you,’” she admits.

Despite facing ongoing backlash from the community, Razia is undeterred to continue to spread her feminist message in the camp. 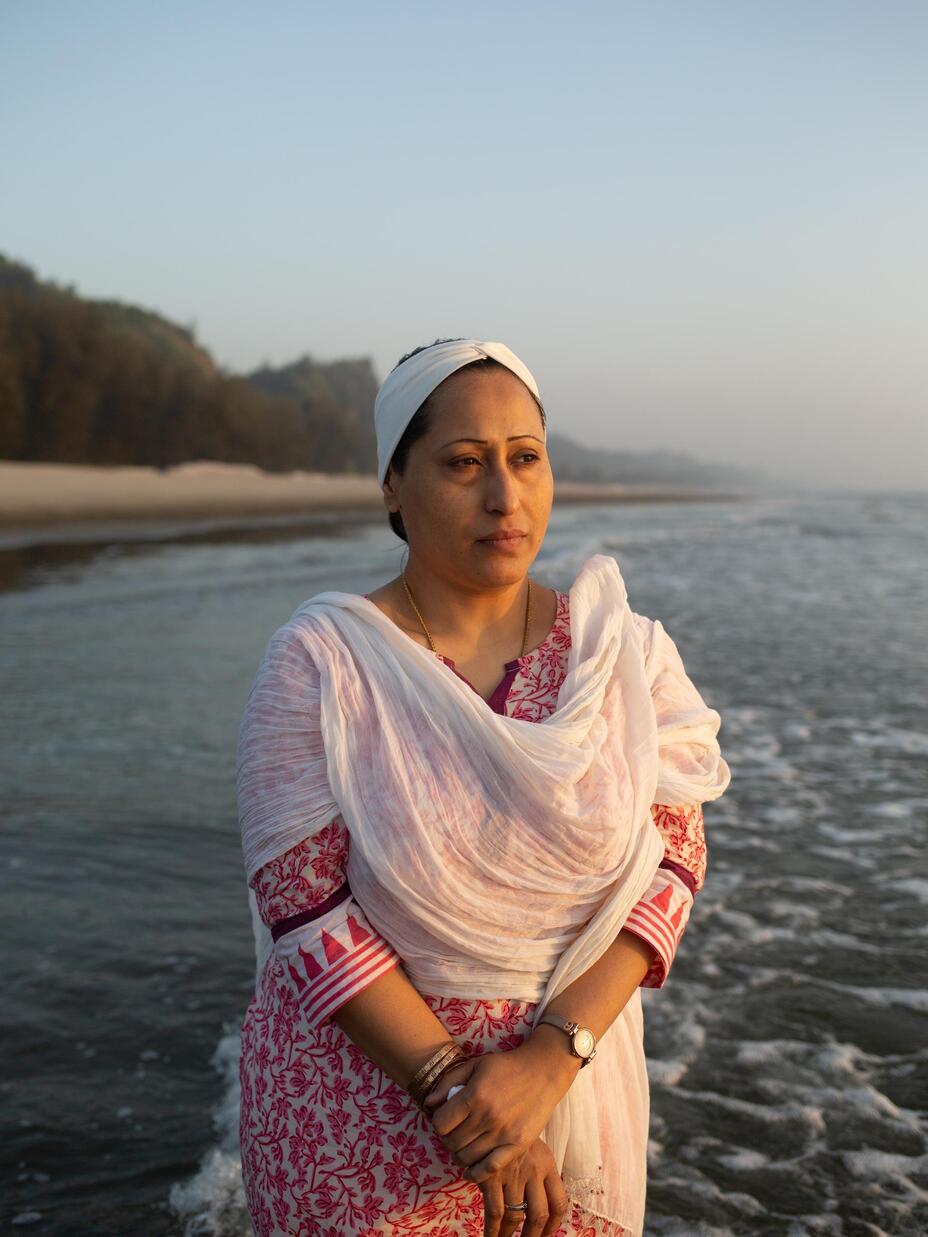 “Women can survive in any kind of environment, I just hold their hand, they’re the ones who can swim.”
Photo: Habiba Nowrose/IRC

“Women should speak! Feminism is not against the man. I don’t want power over the man, I have the same ability as men, it’s working together, not behind or in front, but side-by-side. If you have discrimination against women, you cannot find peace. One thing I believe is that women can survive in any kind of environment, but you have to show them the way. So I just hold their hand, they’re the ones who can swim.”

Our work in Bangladesh

The International Rescue Committee is dedicated to amplifying the voices of independent activists like Razia who are empowering women in their own communities. In Bangladesh, the IRC run safe spaces where Rohingya women and girls can find protection from violence, understand their rights and learn life skills to build towards a brighter future.