Mojdeh is an Afghan asylum seeker who fled to Greece in 2018 with her young daughter. After four years living in limbo in Greece, they still remain living in limbo waiting to rebuild their lives.

I just want a good future for my daughter and myself.

In 2018 Mojdeh fled Afghanistan with her three-year-old daughter. Today, after almost four years in Greece, Mojdeh, a single mother, and her now eight-year-older daughter are trapped in limbo with no documents, no cash assistance, no in-kind support such as food, unable to access healthcare, no right to work and ultimately no way forward.

Her daughter has only started attending school two months ago, after a lifetime of being unable to access education.

This long wait for Mojdeh and her daughter feels like a neverending nightmare.

For many asylum seekers like Mojdeh, who are stuck in Greece without legal status and therefore state support, life in Greece feels like a prison.

After living in unbearable conditions in Vathy camp on the island of Samos for five months, Mojdeh and her daughter were transferred to Ritsona camp on mainland Greece. For the following three and a half years they shared a tent, then container, with another family, which caused Mojdeh and her daughter a lot of distress. Mojdeh’s daughter struggles with a medical condition that requires a high-quality sanitary environment but due to the cramped and overcrowded living conditions, her daughter's health deteriorated.

“The bathrooms were impossible to keep clean with so many people [in Ritsona camp], it led my daughter to get very sick and she spent twelve to thirteen days in the hospital.”

Tragically, in Ritsona camp, Mojdeh and her daughter remained isolated from Greek society while waiting for their first asylum interview. “It was so difficult,” says Mojdeh:

Today, Mojdeh and her daughter are supported by an NGO with accommodation in Athens, but leaving the camp has not improved their situation as asylum seekers in Greece. Despite having applied for asylum in 2018, Mojdeh was not offered an interview date until 2021. For three years she waited in uncertainty, relying on limited government support and NGO aid, isolated in a camp with no ability to make plans for her or her daughter's future.

By the time she received an interview date, Greece had implemented a new policy, which labelled Turkey a “safe third country” for asylum seekers from five countries, including Afghanistan. Mojdeh was interviewed on whether she would be safe in Turkey instead of why she was forced to flee Afghanistan in the first place.

"You must ask about the actual case from our country, why we left our country.”

Mojdeh never had the opportunity to raise her claim on why she fled Afghanistan and why she fears returning to Afghanistan now.

“My family right now is in Afghanistan. Because my father was part of the army they are after him, so he is in hiding, running from one house to another from city to city to flee from the Taliban. I can’t even ask my family for support. They are suffering and I cannot help them in any way.”

Because her claim for asylum was rejected Mojdeh lives with a sense of constant fear, unable to step forward, to reimagine and build a new life with her daughter.

When I feel safe, supported, and on my own feet, I can protect my daughter. You cannot protect someone if you yourself are not safe.


Living outside of state-run camps with rejected asylum claims means they do not receive cash assistance, food or accommodation support,and Mojdeh does not have the right to work.

“Even if I could work, I have a daughter. I can't work because of the hours they offer and lack of childcare for my daughter...

“It is very difficult for me, alone here with my daughter. My daughter has only gone to school for two months."

After almost four years in Greece, Mojdeh’s daughter was recently able to start attending school for the first time in her life, at the age of eight. Even though Mojdeh’s claim for protection and safety has been delayed and rejected, she holds onto hope that she can rebuild her life in Greece. 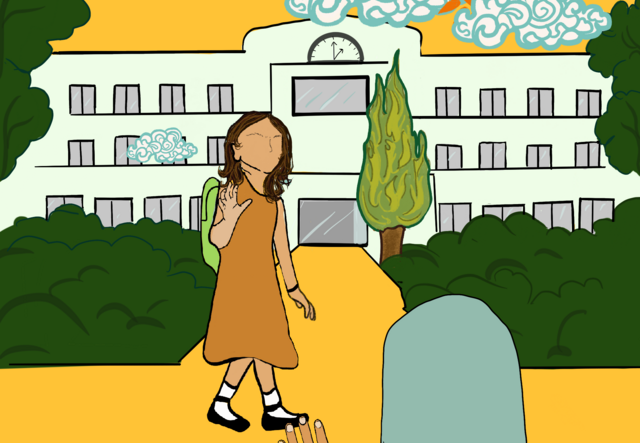 After almost four years in Greece, Mojdeh’s daughter was recently able to start attending school for the first time in her life, at the age of eight.
Photo: Sahar Ghorishi for the IRC

“If in Greece I saw a future for myself, I would see myself living here. I want to work, learn their language, and just have a simple house to have a good future for myself and my daughter. This is a good country, here there is no war. I want to stay, but when I see all these problems I have - I have been here for 4 years with no documents, I have no decision yet, I have been rejected, Greece doesn't protect or support me. If I could, I would stay here and create the best life for myself and give back to Greece."

IRC Hellas is the International Rescue Committee's presence in Greece, working to help people whose lives and livelihoods are shattered by conflict and disaster, to survive, recover and gain control of their future. Read more about our work in Greece.