A new start for a Venezuelan family facing an uncertain future

Violence, economic collapse and crippling shortages now dominate life in Venezuela. Since 2014, living standards have been in freefall with food, medicine and basic services all in short supply.

Andrea*, 29, is one of the more than one million Venezuelans who felt they had no choice but to leave everything behind and start a new life for their family in neighboring Colombia.

Together with her husband and two daughters, ages one and nine, she now lives on the outskirts of the border city of Cúcuta in a small, makeshift house they share with five other people. Andrea describes her life in Venezuela, why she had to leave, and her struggle to survive in Colombia:

“Life inside Venezuela is very difficult. My husband and I have two little girls and it is for their future that we decided to come here to Colombia. It has not been easy, but at least we have food to put on the table.

There is so much hunger in Venezuela. There is a lot of insecurity and so many people have health problems. You can’t find medicine, you can hardly get food, and if you can find food it’s at a very high price.

Before we came to Colombia, things in Venezuela were starting to get very difficult for us. My husband had a stable job, but his boss was thinking about leaving the country. And if he left then my husband would lose his job. With minimum wage you can barely buy anything—without an income at all it’s impossible.

Andrea, her husband and their two daughters share a small, rented house outside the city of Cúcuta with five other people. "When we arrived in Colombia we had to start again from zero," Andrea says.

Before they left Venezuela, the family sold their refrigerator, washing machine, and all their other possessions—but the cash they received was nearly worthless in Colombia. The found it difficult to buy even enough to eat. "There were days when we went to bed with nothing in our stomachs," Andrea says.

Andrea's younger daughter was just a few months old when the lack of food and health care forced the family to leave Venezuela. In Cúcuta, Andrea took part in IRC classes designed to help parents and their children who are living through the crisis to cope with trauma and build resilience.

Andrea's older daughter, 9, works on a puzzle at the IRC's care center in Cúcuta while her mother meets with IRC staff. In a few months she will start school, where her mother hopes she'll make friends.

The cash they received from the IRC has helped Andrea's family to make a new start in Colombia: They've not only used it to buy food and a refrigerator, but also tools that have enabled Andrea's husband to rebuild his career as a cellphone repair technician.

Although Andrea is relieved that her husband is finding new clients and getting work, she says, "our future here is still uncertain." She also says it's hard not being able to see her mother, the only relative she has left in Venezuela. "Obviously, I miss my country—but it will be a long time until Venezuela recovers."  Read Andrea's full story. (Photos: Andres Brenner/IRC)

We decided the only option was to come to Colombia ourselves. We had some friends who were already here so we knew we would not be alone."

"Before we left, I sold everything we had: the stove, our washing machine, the refrigerator—everything. Of course the Bolivars [Venezuelan currency] we managed to get for them were almost worthless once we got to Colombia. We managed to buy two floor mats and nothing else.

There were days when we went to bed with nothing in our stomachs.

The journey here was the worst trip of my life. We traveled for 15 hours in a bus. My youngest girl got sick on the way and she spent the trip with a fever and vomiting. On top of that we had so many things to try and carry: the crib, the fan, her stroller, and two suitcases. The truth is that it was very difficult.

When we arrived in Colombia we had to start again from zero. Back in Venezuela we at least had a home, built from concrete bricks, with a kitchen and gas for cooking. Here we had nothing at all.

After a few months of support from some of our friends and neighbors, we managed to rent this house along with my husband's brother, his cousin, and three boys we met who had nowhere else to stay. We now pay the rent all together.

It is not easy here in Colombia. It is true that we are next to Venezuela, and there are many Venezuelans here, but they do not have the same customs, or eat the same food. It is not even the same dialect. It has been difficult being away and not being able to see my mother, who is the only relative I have left in Venezuela.

We have worked hard to try and earn money here, selling small items like breakfast cereal and jam door-to-door or on the street. Very often the little money we made was just enough to buy a packet of rice and nothing else.There were days when we went to bed with nothing in our stomachs. But we did not stop, because every day we had to keep fighting and fighting and fighting to survive.

One day some people from the International Rescue Committee came to my door to invite me to join some workshops which were designed to help us Venezuelans and also Colombians who had lived in Venezuela but had to return [because of the crisis].

We also received some cash from the IRC, which they said we could spend however we wanted. 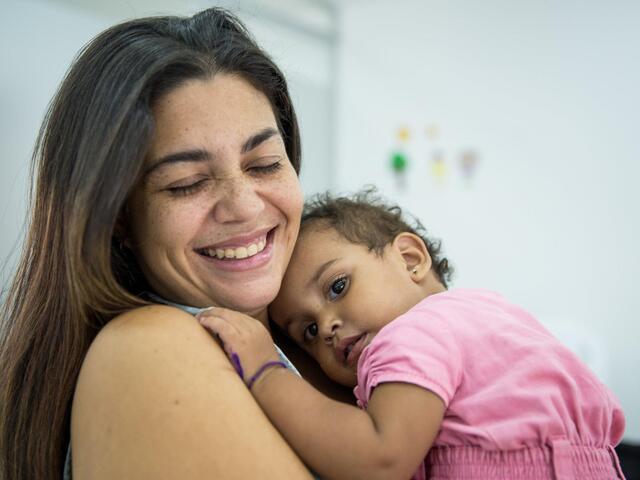 Andrea and her younger daughter at the IRC care center in Cúcuta. "It has not been easy, but at least we have food to put on the table," Andrea says. "There is so much hunger in Venezuela."
Photo: Andres Brenner/IRC

My husband is a technician in cell phones and computers, and so we used that cash support to buy a computer and some tools so that he could repair cell phones. Thank God now he has a job doing that. Of course it was not easy to build a client network, but little by little people are getting to know him and his work. He has gone from working here in our house to making repairs in a shop.

We also used some of the money to buy food as well as a fridge for the house. With the heat here it is so important to have the fridge so that we can drink cold water.

Our future here is still uncertain. Obviously, I miss my country—but it will be a long time until Venezuela recovers. My older daughter will start school in the next few months and I hope she makes friends here. I hope my husband can get a better job, and we can be more financially stable here and finally be at peace.

It is difficult to describe with words how I felt the moment the IRC gave us help and I just cried and cried and cried. The IRC and the people on their team are wonderful. I really hope that they can help many Venezuelans like me.

Since April 2018, the IRC has been working in Cúcuta, Colombiasupporting Venezuelans and vulnerable Colombians with emergency cash, health care, and specialized services to help women and children overcome trauma they have experienced and build their resilience. The IRC has reached over 5,000 people in Cúcuta and will expand its work to support Venezuelans across Colombia in the coming months.