A Syrian father describes the terror families are facing in Idlib

Nearly a quarter of IRC staff members have been forced to flee their homes as a result of airstrikes and bombings in northwest Syria. This IRC staffer, a native of Syria, shares his heartbreaking story, and why, despite all, he stays to help save lives.

He’s a father in Syria. He risked his life to help others and opened his home to people in need of shelter. He stayed as long as he could, until he no longer felt he could protect his own family—until they, too, were uprooted.

Nearly one million Syrians in northwest Syria have been displaced since December in the wake of an intensified military operation by the Syrian government and its allies to take control of the last rebel stronghold in the country. This is the largest displacement we have seen since the start of the war nine years ago. A recent ceasefire will provide much needed relief for civilians, but it will not end the war or the suffering.

The International Rescue Committee spoke with a staff member who helps thousands of displaced families receive cash assistance in Idlib, a province in northwest Syria. The staff member, who wishes to remain anonymous, was forced from his home when his family was threatened by the violence. Below, he describes what it’s like to live and work under relentless violence, as well as the last moments he had with his family before sending them elsewhere to ensure their safety.

When I said goodbye to my children, they were distraught. Crying, screaming, clinging to their mother for comfort. It was awful. But you have to remain strong and positive as a parent—even though that’s not how you feel on the inside. I sent them away with their mom somewhere where there’s no fighting.

I’ve had to leave my home three times during the war, but I know people who have had to move 10 or more times. I used to rent out my house to those who had been displaced so they had somewhere to stay. I knew it could be me in their shoes one day—I knew that I could become displaced in the future. And now I am.

When I left my home in January, there were up to 10 planes hovering over us. Heavy artillery shelling, and machine-guns firing . There were so many [bombs] falling from the sky that it felt like it was raining.

It’s not the planes we fear, but what drops from them. And it’s the choppers that we fear the most, because they’re the ones that drop the barrel bombs, which cause the most damage. 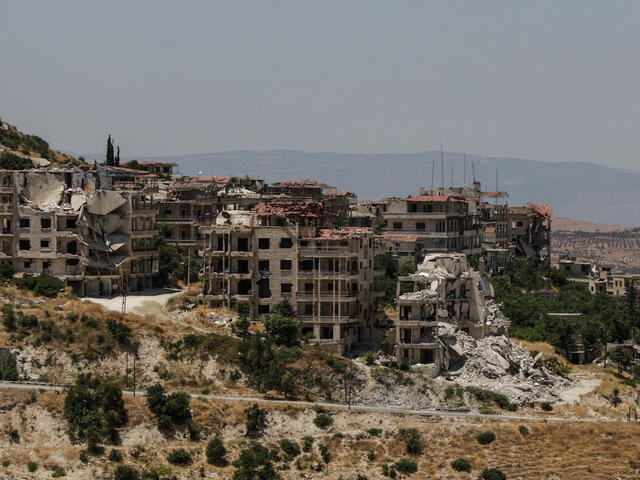 Destroyed buildings in Ariha, a city in Idlib province. Nearly a million people have fled their homes in Idlib and other areas of northwest Syria since last April.
Photo: IRC

I knew that I could become displaced in the future. And now I am.

What are you meant to do in a situation like that, where you have absolutely no control over the situation and are wondering the same things? All you can do as a father is promise them that you’ll get them to safety.

“I know I may not see my family again”

It’s hard to find the correct word to describe how I feel. Leaving a place with all your dreams, with no going back. How do you describe that? Destroyed? Devastated?

I cannot sleep at night. I have a lot of nightmares. I slept at 2AM last night and kept waking up every hour. Your mind doesn’t sleep. Your body may be physically sleeping, but your mind is still active.

When I wake up in the morning, the first thing I think about is my family and whether they’re safe. I grab my phone and look for news—making sure my family is safe is my No. 1 priority. I know I may not see my family again. They may die. I may lose them. I know these things. But we’ve had these things in mind for a long time.

When I left my home, I was able to take my car and took as many people as I could, but there were some families who had no option but to go on foot. It felt awful driving past those families, but there was no space for them all.

Where I am now, I’m staying with friends. Again, I was lucky, because I have been able to find a house. But there are thousands of people living in tents or empty buildings. Others are out in the open with no shelter at all because there have been so many people coming so quickly over the past few months, that it hasn’t been possible for humanitarian agencies to keep up.

“People have been through tragedies”

As the International Rescue Committee, we search for the most vulnerable people and support them with cash assistance, because in these kinds of situations, cash is what people say they need the most so that they can buy what they actually need and what will help them the most. But they only really have two choices at this moment in time: to buy food for their family, or to buy a tent.

It is a desperate situation. People have been through tragedies. They have no home. They need a place for their children. They’re looking for ways to earn money so that they can feed them. They’re constantly wondering if they’re going to have to flee again. We left our homes and went into the unknown where everything is uncertain. And all that worry takes its toll on you.

All you can do as a father is promise them that you’ll get them to safety.

“Without hope, we’re not human”

With this happening for so many years, when someone asks how I am, it’s just routine to say that I’m fine. Even though I know I’m sad.

So far, up to seven children have died in Idlib because of the cold. The father of one of these children took his daughter from their unheated tent to the nearest doctor, not knowing that she had died. When he reached the hospital, the doctor told him that she had passed away two hours ago.

Those who are out in the open in the cold are wishing that they had left months ago because there are no houses available anymore. They held on until the very last moment because they didn’t want to believe that they would have to go. And now they are really suffering. Their only priority is to survive.

In spite of everything, though, people still have hope. Without hope, we’re not human beings. So, we have hope that things will get better. People will return to their homes. We have hope that we have lived good lives before, so we will live well again.

The IRC in Syria

Last year, the International Rescue Committee provided lifesaving support across Syria to over 1.1 million people—almost half of them children—who are struggling to survive a brutal war now in its ninth year.