In November 2020, the internet and phone lines were cut off in Tigray, northern Ethiopia. Violence escalated, while the rest of the world was left in the dark about what was happening.

Mulu, Berhan and Azmera are three women who fled Ethiopia to seek refuge in Sudan. Their stories are crucial in enabling the world to bear witness to the horrors that continue to unfold today.

“We had a good life — we were thankful with what we had,” says Mulu reflecting on her life in Tigray before she made it to Sudan. 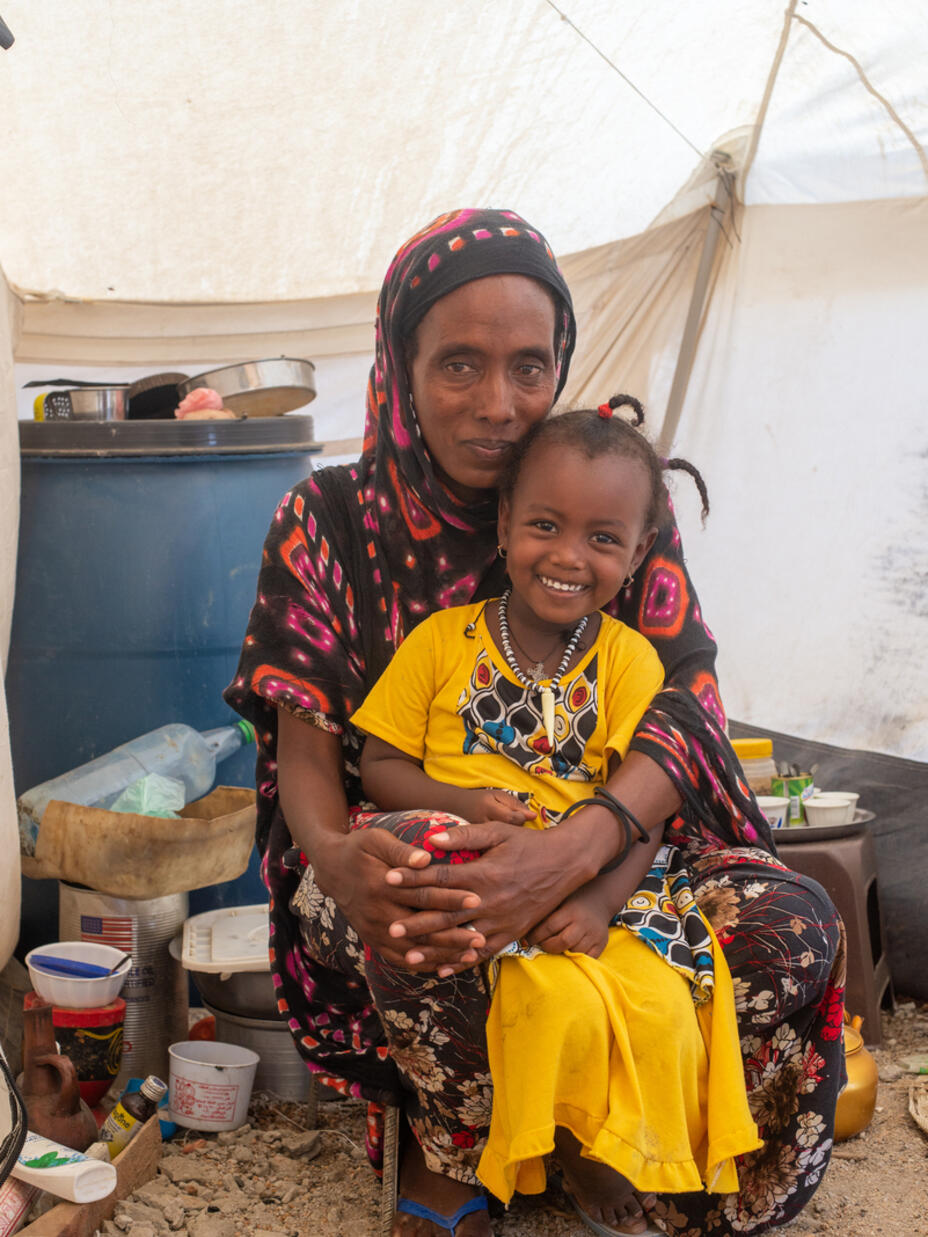 Mulu fled from her home in Humera, located in the Tigray region of Ethiopia. She now lives with her husband and children in Gedaref camp in Sudan.
Photo: Khalid Alarabi/IRC

Living in the town of Humera, Mulu’s husband used to trade goods with Sudan. Their life was comfortable and happy, renting a home they loved and bringing up their two children.

“I was baking injera [flatbread] when the war began,” Mulu remembers. She went from making lunch for her children to scooping them up to run for their lives. She was only able to grab a few possessions: “The photos were hanging on the back of the door when we left,” she says, cradling the pictures that remind her of the life she’s left behind.

When we left, a bomb exploded under the date tree where we had just been standing.

“When we left, a bomb exploded under the date tree where we had just been standing,” she says. “During the journey, there was a pregnant woman with her husband. The husband died on the way. We buried him and continued on.”

Mulu managed to make it across the border with her family, using a jerry-can as a boat to cross the river to Sudan. They arrived at the camp with almost no possessions. “My baby girl didn’t even have clothes,” she explains. It was thanks to Mulu’s friend, living in Sudan, that she was able to get together some money and baby clothes. 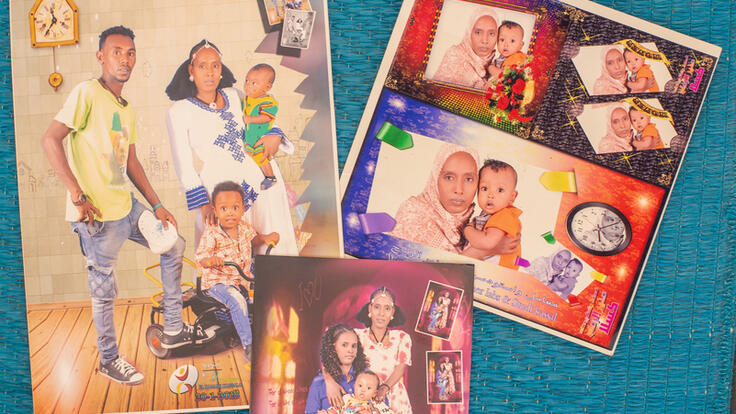 Mulu managed to only bring some photographs with her when she left Humera.
Photo: Khalid Alarabi/IRC

Now living in Tunaydbah camp along with 60,000 other refugees that have made it over the border, Mulu always thinks about the rest of her family members. “Living without knowing the whereabouts of your family [makes you] live in constant worry,” says Mulu. “I don’t know where my mother and sisters are. As for my brother, I heard about his death from the television.”

As a result of chronic stress, Mulu’s health had started to deteriorate. “From the day the war broke out, I was constantly getting sick,” she explains. Through funds from the European Union, the IRC is running health centres at the border of Ethiopia and Sudan. There, Mulu was able to get treatment and is now feeling better. 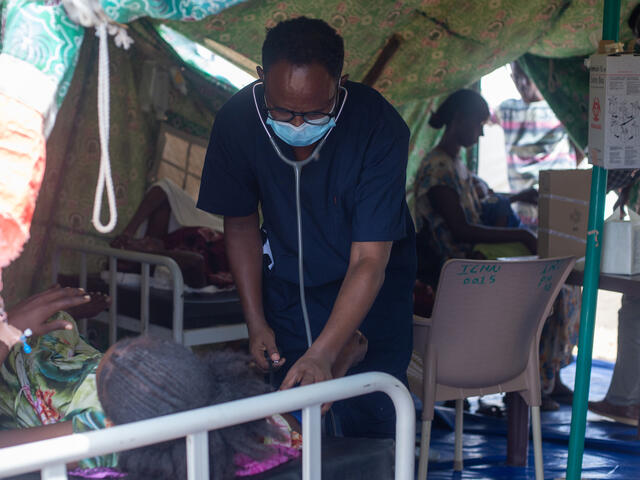 Through funding from the EU, Mulu was able to get treatment at the IRC’s health centre in Gedaref camp.
Photo: Khalid Alarabi/IRC

Having gone through these harrowing experiences, Mulu still holds on to hope for the sake of her children. “Will this time pass? May we go back to our homeland from this desert? That is our hope,” she says, a solemn look on her face. “After all this loss, the hope that we may see our homeland again sustains me.”

She wishes for peace to prevail, so her children can have a future. “I want [my children] to return to their homeland so that they get educated, and for the war to stop so that we can meet our family once again,” she says.

“Life in my village was peaceful. I had a great hotel, and a huge house,” says 60-year old Berhan, reminiscing about her home.

With the outbreak of violence, her hotel was looted and her property seized. Berhan tried unsuccessfully to get her last few possessions from her home, but instead was captured and put into prison for two months. 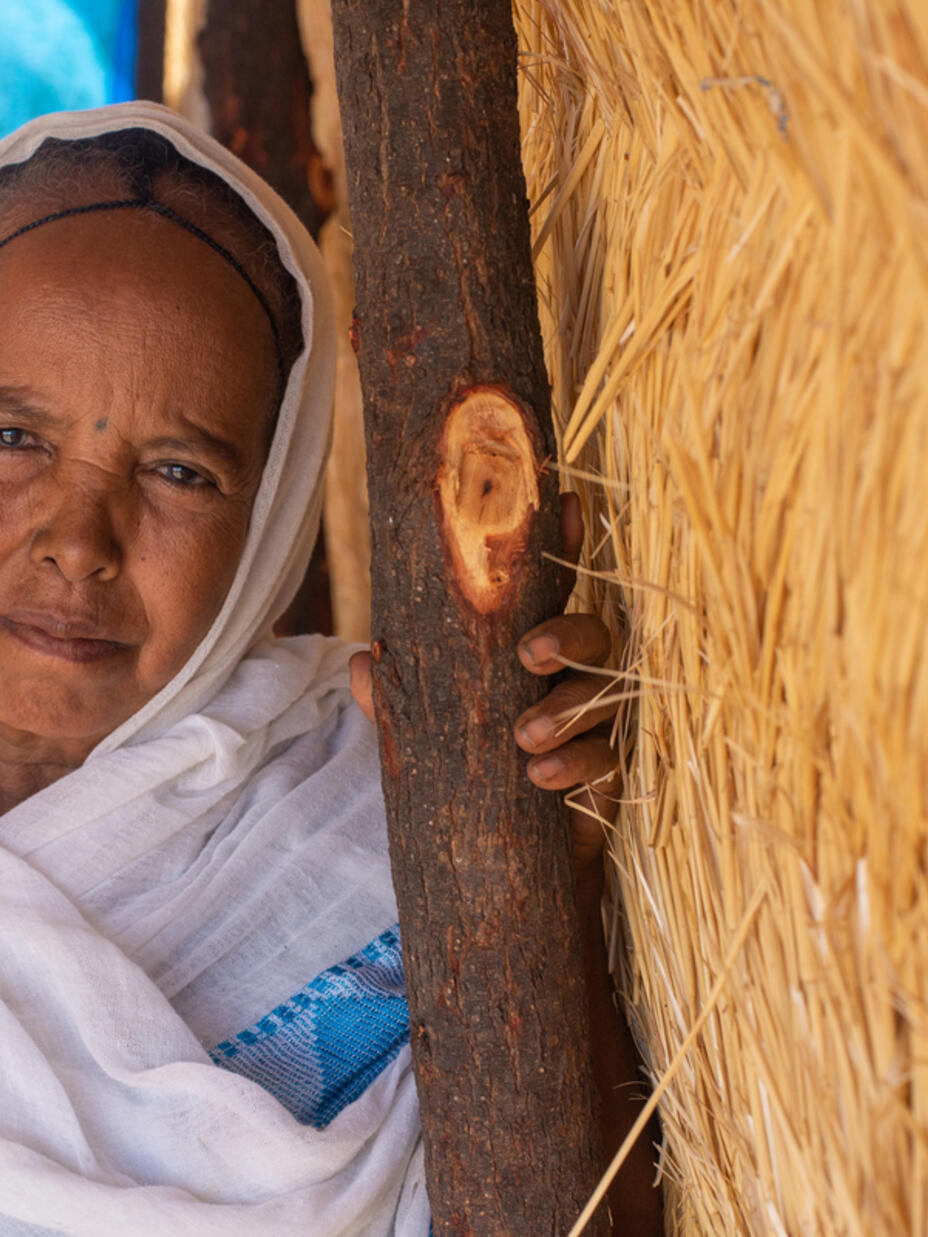 60-year old Berhan fled from Mai Kadra, located in the Tigray region of Ethiopia. Along with other Tigrayans, she now lives in Gedaref camp in Sudan.
Photo: Khalid Alarabi/IRC

Having nothing left except the pyjamas she was given at the prison, Berhan was determined to escape Ethiopia. “Even if I died on the way, it was better than being killed,” she explained, recounting her decision.

Beginning her journey at 3 am after being let out of prison, she began to walk through the wilderness surrounding her hometown, hoping to eventually end up on the road going towards where her family lived. She was helped by a young boy, who found her wandering in the wrong direction. He began guiding her to the border with Sudan.

After developing severe cramps and swelling in her legs during the journey, Berhan had to be carried on a stretcher to the camp after she crossed to Sudan.
Photo: Khalid Alarabi/IRC

Walking long distances through landscapes with thorny plants, Berhan’s feet began to blister and she developed severe cramps in her legs. “I was carried over the river,” she says, describing the moment she crossed to Sudan. “My legs just couldn’t walk anymore.”

Even if I died on the way, it was better than being killed.

She was reunited with her daughter in Sudan, and received treatment for her legs from the IRC’s EU-funded health centre in Gedaref camp. But Berhan’s mind still races from all the violence she’s had to witness. “I am relieved that we have somewhere to sleep at night,” she explains. “But we can’t sleep. Our minds can’t deal with the things we’ve experienced. Even if we try to forget them, we can’t get rid of the memories.” 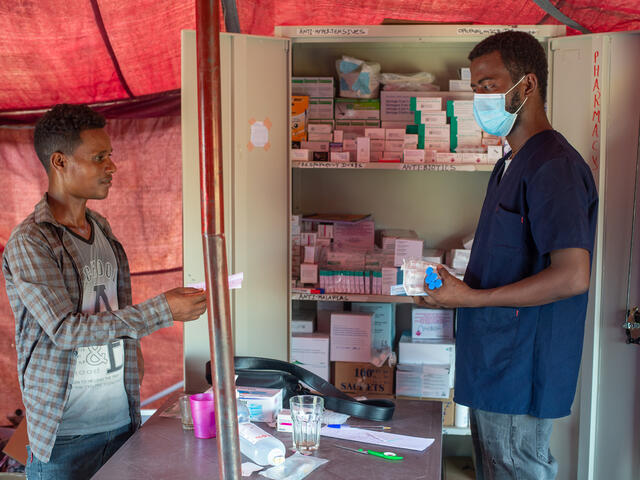 Berhan was treated at the IRC’s EU-funded health centre in Gedaref camp, where she received medicine and injections for her legs.
Photo: Khalid Alarabi/IRC

Despite this, she remains steadfast in her hope to return to Ethiopia and reunite with her two sons. “I have never seen anything like this in my lifetime,” she says, wistfully looking into the distance. “I worry about my children.”

She dreams of peace being restored, so other families like hers can once again live like they used to. “If we can’t achieve peace, we can’t do anything,” she says.

“We had a decent livelihood back home,” says 30-year old Azmera*. “We had freedom and lived a good life.”

30-year old Azmera used to live with her husband and daughter in Humora, located in the Tigray region of Ethiopia. She escaped, and now lives in Tunaydbah camp, in eastern Sudan.
Photo: Khalid Alarabi/IRC

Working for a private organisation in her hometown of Humera, she earned a decent monthly wage. But when violence erupted, the organisation’s properties were looted and Azmera was unable to access her bank, where all her money was.

She and her family escaped by hiding in the wilderness surrounding Humera, expecting the violence to subside soon. But after returning to Humera, Azmera saw the casualties firsthand — young people who had been killed, thinking that they were finally out of harm’s way. “They were only civilians,” she said. “Peaceful young adults who were unarmed.” 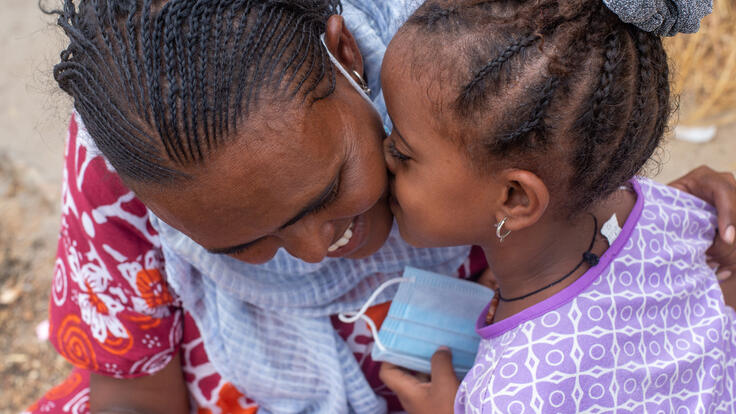 Azmera escaped without bringing anything with her. “My daughter had some toys she used to play with and she asks me where her toys are,” she explains wearily. “But she understands that we had to flee and come here.”
Photo: Khalid Alarabi/IRC

Azmera has a disabled leg and struggles to walk for long distances, but the urgency of the situation kept her going. She set off on the path towards Sudan with her daughter. Hiding and sleeping in the wilderness for two days, she described being chased by soldiers who were capturing anyone trying to escape. She witnessed pregnant women struggle on the journey, with no medical services on the way, some of them were unable to make it.

Our children had better lives before, when there was peace.

After crossing into Sudan, Azmera had managed to put herself and her daughter out of immediate risk. But arriving at Tunaydbah camp, located in eastern Sudan, she ruminates over everything she left behind. “Our children had better lives before, when there was peace. My daughter used to go to preschool,” she says. She began to worry about the impact displacement and the journey had on her daughter. 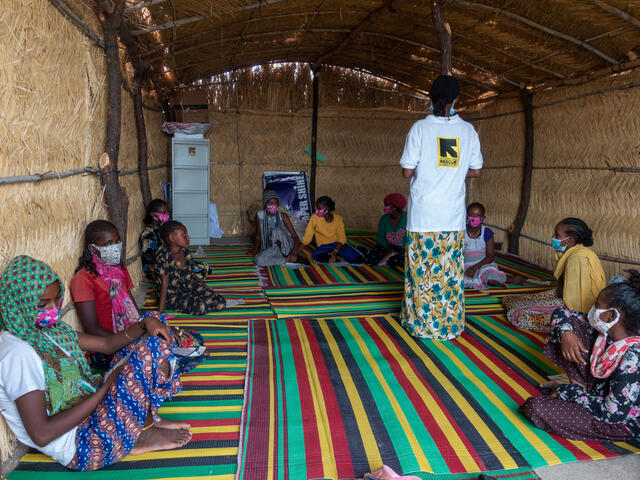 Through funds from the EU, the IRC is running safe spaces for children where they can learn and play in a nurturing environment. The IRC is also running sessions for adults to help them tackle the trauma of displacement and teach coping mechanisms for shock and depression.
Photo: Khalid Alarabi/IRC

Azmera has seen improvements in her daughter’s mental health since she started going to the EU-funded safe spaces. “When she comes home, all she does is talk about school,” she says, smiling at her daughter. “It has really helped to get the depression out of her mind.”