What is the EU-Turkey deal?

Five years since the announcement of the 'EU-Turkey deal', this arrangement continues to cause immeasurable suffering in Greece. But what is it? And why is it such a problem? Find out here.

What is the EU-Turkey deal?

The ‘EU-Turkey deal’ is the term often used to describe the ‘statement of cooperation’ between EU states and the Turkish Government, which was signed in March 2016.

It agreed on three key points:

In exchange, Turkey would receive €6 billion to improve the humanitarian situation faced by refugees in the country, and Turkish nationals would be granted visa-free travel to Europe.

The message was clear: those attempting to reach Greece irregularly would be swiftly returned, while those who waited patiently in Turkey would have the chance to enter in their place.

Why was the EU-Turkey deal introduced?

The deal was one element of the EU’s response to a sharp rise in the number of people arriving on Europe’s shores in search of safety and protection in 2015. In that year, almost 1 million refugees arrived in the European Union, while more than 3,500 tragically lost their lives making the treacherous journey. More than 75% of those arriving in Europe had fled conflict and persecution in Syria, Afghanistan and Iraq.

The increase in new arrivals dominated headlines, sparked heated public debate, and began to polarise public opinion. While there was a huge outpouring of support and solidarity from some countries and communities, a number of populist political parties and movements across Europe also employed strong anti-migrant messages and imagery to further their own agendas.

On 18th March 2016, EU member states began closing their borders in efforts to prevent people reaching their territory irregularly. Yet as the number of new arrivals in frontline EU states such as Greece increased, the EU began to put greater pressure on Turkey to curb departures from its own coastline.

On March 18th 2016, the EU-Turkey statement was announced, and it was implemented two days later. It was supposed to be a ‘temporary measure’ intended to stop irregular migration to Europe. 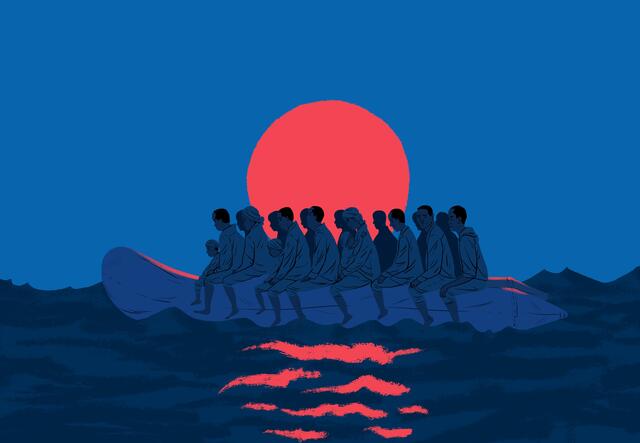 Did the agreement have its intended result?

Yes and no. While the implementation of the EU-Turkey statement may have  contributed to the significant reduction in the the number of people risking the dangerous journey to Greece, the price for those that do make it to the EU has been unbearable, and the total sent back to Turkey under the deal has been negligible.

Only 2,140 people have been returned from Greece to Turkey under the deal over the past six years.  This is partly because - in many cases - Greek courts acknowledged that Turkey is not a safe country to send people back to.

The situation was compounded further still by the COVID-19 pandemic, as Turkey has refused to receive refugees from Greece since March 2020.

Six years since the deal was implemented, no mass returns have been made from Greece to Turkey. Approximately 32,472 Syrian refugees have been resettled from Turkey to EU Member States under the agreement. 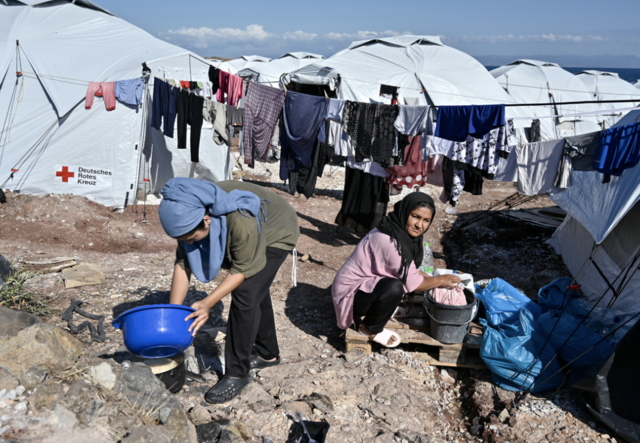 How has this affected refugees in Greece?

The containment policies put in place as a consequence of the EU-Turkey agreement have come at an immeasurable cost to people seeking safety and protection, trapping thousands of asylum seekers and refugees in limbo with devastating impacts on their physical and mental health.

Worryingly, this situation was worsened in June 2021 by a Greek Joint Ministerial Decision (JMD) which designated Turkey as a ‘safe third country’ for people from Afghanistan, Bangladesh, Pakistan, Somalia and Syria.

While the EU-Turkey ‘Deal’  impacted people seeking protection on the islands, this JMD applies to asylum seekers anywhere in Greece. Based on this new policy, asylum applications of people from these five nationalities will not be examined based on their individual circumstances and the risks they face in their country of origin. Instead, they are presumed to be safe in Turkey, and only if Turkey is proven not to be safe, are these applications deemed ‘admissible’, and Greece will examine them. 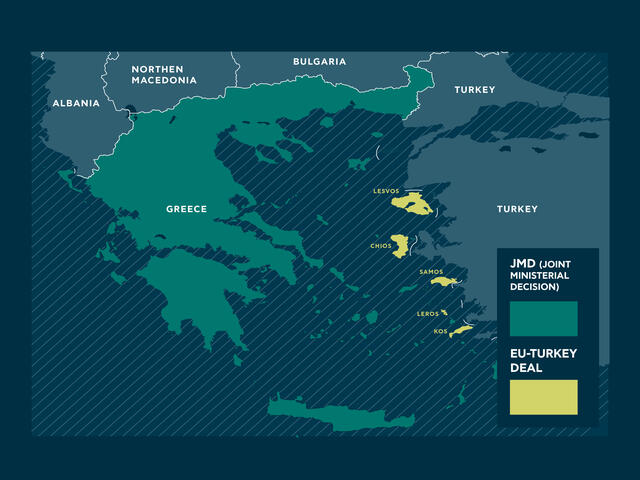 The EU-Turkey 'Deal' only impacted people on the Greek islands, while the JMD applies to asylum seekers anywhere in Greece.

Three out of the five nationalities mentioned in the JMD are those who are most often recognised as refugees in Greece. Following the JMD, however, rejections have risen sharply. In 2021, there were 6,424 rejections of applications as “inadmissible” – a 126% increase on 2020.

Since Turkey has not been accepting returns for the past two years, people deemed ‘inadmissible’ have been stuck in Greece in a legal limbo: they have no access to asylum or documents indicating their legal status, and no right to housing, cash assistance, work, or catering services in the camps they reside in.

Watch the video below to hear the words of Audrey, Baimba and Hassan who have experienced mental health symptoms during their time trapped on the Greek islands.

How can this be resolved?

The EU and its member states can and must urgently put an end to the immense suffering experienced by refugees and other migrants in Greece. Here’s how:

This means that almost half of all applications of people from Afghanistan, Syria, Somalia, Bangladesh and Pakistan are not examined ‘on the merits’. In other words, asylum applications from people of these five nationalities are not examined based on their individual circumstances and the risks they face in their country of origin.

Instead, they are presumed to be safe in Turkey, and only if Turkey is proven not to be safe, are these applications deemed ‘admissible’, and Greece examines them. People with marginalised identities or conditions deemed “vulnerabilities”, including thousands of children, are not excluded from these policies.

The IRC is calling for everyone’s asylum application to be examined on its merits, irrespective of where they come from. 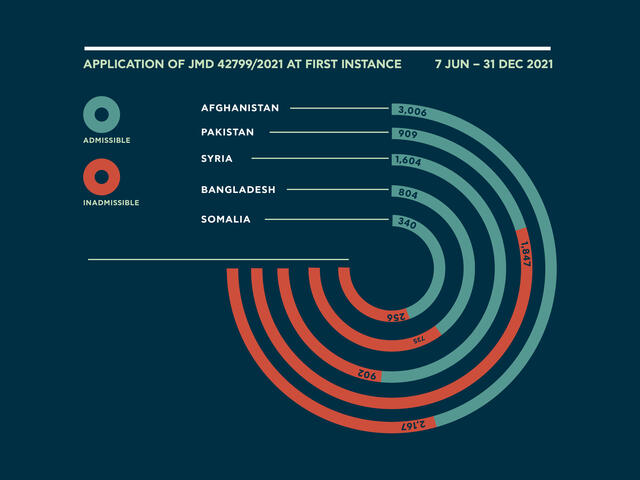 The people whose applications are deemed to be 'inadmissible' are left in legal limbo - with no right to housing, cash assistance, work, or catering services in the camps they reside in.

The EU must forge a response to forced migration that is rooted in solidarity and responsibility-sharing to ease the pressure on frontline member states, and ensure a fair, sustainable and humane relocation system which works for new arrivals and host communities alike. The EU must no longer shift responsibility for migration to countries on its external borders such as Turkey and Libya.

These policies of externalisation are unsustainable, dangerous and threaten to undermine the EU’s fundamental values of respect for human rights and dignity. The impressive mobilisation of the EU and its member states in response to the arrival of refugees from Ukraine in the past month shows that Europe has the capacity to welcome refugees in a coordinated, fair, and humane way when it has the will to do so.

The EU must urgently expand existing and create more safe, legal routes to protection in Europe so people are not forced to risk their lives on these dangerous journeys in the first place.

The EU Pact on Migration and Asylum is a chance to fix these flawed policies. However, current proposals look set to reinforce some of the most damaging elements of the EU-Turkey Statement including containment, the degradation of procedural safeguards, and the externalisation of EU migration policy. We look forward to working with the institutions and member states to ensure these do not become a blueprint for the EU’s future approach to forced migration.

Learn more about the EU Pact on Migration and Asylum.

Learn more about impacts of the EU-Turkey Statement and the JMD on people seeking protection in Europe in our new joint NGO briefing.

Read our report: ‘The Cruelty of Containment: The Mental Health Toll of the EU’s ‘Hotspot’ Approach on the Greek Islands’

Make a donation to help us provide life-saving care to people fleeing conflict and natural disaster.