What is refugee resettlement?

Refugee resettlement is an internationally-agreed framework, which aims to provide a pathway to safety and a durable solution for refugees. States, such as EU countries, the US, Canada, or the UK, voluntarily agree to welcome recognised refugees who have already fled their countries of origin, are particularly vulnerable, and cannot receive the support they need in their host countries.

In October 2022, EU countries will be announcing their pledges for how many refugees they plan to welcome through this route in 2023.

The IRC is calling on EU countries to make ambitious pledges to resettle at least 40,000 refugees next year, and to ensure that resettlement programmes continue to grow.

are in need of resettlement today.

However current pledges fall short of this need. In 2021, EU states resettled only 15,660 refugees, or less than 1.1% of global needs.

The IRC is calling on EU countries to make ambitious pledges to resettle at least 40,000 refugees next year, and to ensure that resettlement programmes continue to grow.

83% of refugees worldwide are hosted by low- and middle-income nations, who often face domestic hardships that make it harder to offer protection. Refugee resettlement is a tried and tested way to support displaced people and the countries that welcome them. It is also one of the few safe and orderly ways for refugees to come to Europe. It therefore remains a large focus for the IRC in the EU against rising humanitarian crises around the world.

Over 2 million refugees are in need of resettlement today. However current pledges fall short of this need. In 2021, EU states resettled only 15,660 refugees, or less than 1.1% of global needs.

The IRC is committed to working with EU member states to expand their resettlement programmes and ensure existing pledges are honoured. The IRC is one of the largest non-profit resettlement agencies in the US, having resettled over 400,000 people in the past 4 decades, and has provided capacity-building support for resettlement and integration programming to 18 countries, including in Europe. As a result, we know first-hand the transformative and life-changing impact that resettlement can have, for refugees and receiving communities alike.

Read on to understand more about resettlement and what the EU can do to support refugees through this durable solution and crucial pathway...

What is refugee resettlement?

Refugee resettlement provides a durable solution for refugees who are outside of the EU, in particularly vulnerable situations, and who do not have adequate support in their host countries.

Today 83% of the world’s refugees live in low and middle-income countries, and 72% live in countries neighbouring those they had to flee. Through resettlement, some of the most vulnerable refugees in these regions are transferred to safe countries elsewhere - such as EU states, Canada, the UK or the US - where they are granted a pathway to permanent residence.

Resettlement countries choose to commit to accepting a certain number of refugees each year. The UN refugee agency, UNHCR, refers refugees to states, who then choose who they admit, according to their own national criteria. 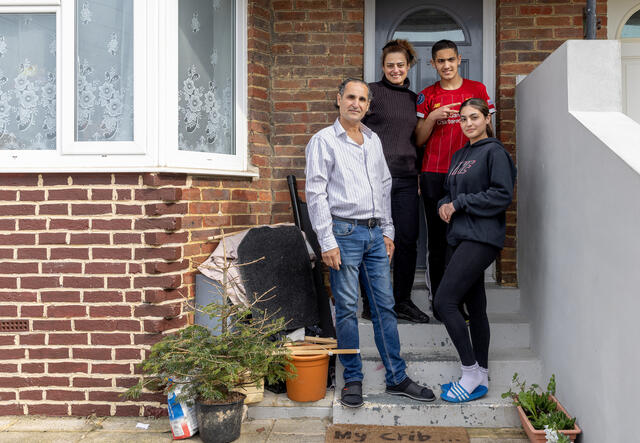 Chadia fled Syria with her two children in 2016, joining her husband in the UK. Upon arrival they were resettled to Brighton in the UK.
Photo: Betty Laura Zapata for IRC

Resettlement is also currently one of the few safe and regular legal ways that refugees are able to reach safety in EU states without further risking their lives on perilous journeys in search of protection.

Resettlement is separate and additional to asylum, and cannot replace a functioning asylum system. Whereas resettled refugees have already had their international protection needs recognised, people who reach Europe’s borders by their own means in search of safety must be guaranteed access to fair and full asylum procedures, regardless of country of origin.

Why is resettlement important?

Even long after their departure, many displaced people still cannot return to their country of origin as they continue to face grave dangers, such as violence or persecution. This may make return impossible.

In the regions they have fled to - especially those that host large numbers of refugees - people and families are often forced to live in camps or substandard shelters for long periods of time. These states are demonstrating immense generosity, but they often do not have the wealth or resources to cater for people’s complex needs, guarantee successful integration, or provide lasting protection.

In some cases, these countries cannot uphold the fundamental rights of refugees - and particularly of the most vulnerable, at whom resettlement is aimed. A large majority of people in need of resettlement are women and girls, survivors of violence and/or torture, and people with specific legal and/or physical protection needs. 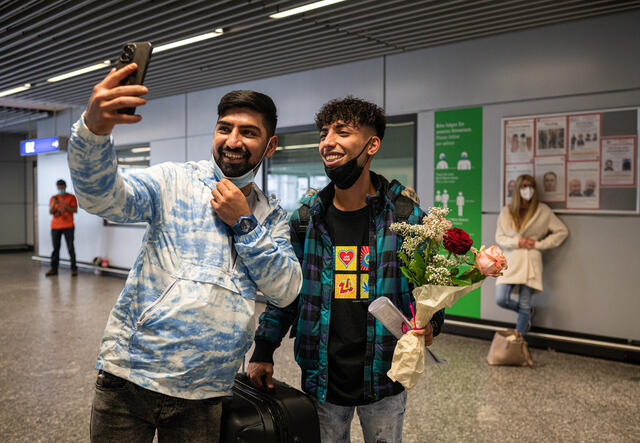 Mehdi and Ali are brothers from Afghanistan who waited 10 years to be reunited. The IRC supported Ali when he was living in a camp in Greece to resettle with his brother in Germany.
Photo: Lena Mucha for the IRC

For refugees, resettlement can be a lifeline: it gives them a chance to find a stable new home, take back control over their own life and become self-reliant, and integrate into a society that recognises their rights.

For states, it is an important tool to show international solidarity with other countries and people in need of international protection, to share responsibility for refugees in the international community, and alleviate problems impacting the first country of asylum, improving the situation for those remaining there. This way, resettlement can encourage and enable host countries to keep offering protection to other refugees in need.

Video
Video: Families interview one another about their unique refugee stories

For receiving communities, resettlement can be greatly beneficial as it allows for the effective reception and integration of refugees. If adequately supported, refugees often thrive and contribute immensely to their communities, building their families and careers, and gaining citizenship.

What are current resettlement needs?

The most recent figures from UNHCR show that the number of people displaced from their homes has soared to a record 100 million in 2022, having reached 89.4 million at the end of 2021. In this context, the need for resettlement is more pressing than ever.

An estimated 2 million particularly vulnerable refugees will be in need of resettlement in 2023, a figure that has more than doubled since 2010, and a drastic increase from 1.47 million year-on-year from 2022.

For the seventh year in a row, Syrian refugees have the highest global resettlement needs, followed by refugees from Afghanistan, the Democratic Republic of the Congo, South Sudan, and Myanmar.
Meanwhile, the situation in many refugee-hosting countries such as Turkey, Lebanon and Libya continues to worsen.

For example, in Lebanon, nine out of ten refugee families live in extreme poverty, and 90% of its 1.5 million Syrian refugees need humanitarian aid. In Afghanistan, over 700,000 people were forced to flee their homes last year, adding to the 5.5 million people already displaced in recent years - with over 90% of registered refugees hosted in Iran and Pakistan and an important gap in resettlement from the region. Turkey continues to host the largest number of refugees worldwide, including 3.6 million Syrian refugees, and needs along the Central Mediterranean Route, including Libya, are also increasing. The COVID-19 pandemic has also had a profound impact on these countries‘ capacity to ensure refugees‘ protection.

What must the EU do to help?

With European states’ attention now focused on receiving people fleeing the conflict in Ukraine, already reduced resettlement efforts now risk taking a further hit. Instead, it is imperative that programmes are strengthened and scaled up in a future-proof way. The positive momentum and solidarity expressed in welcoming people fleeing Ukraine must lead to strengthened refugee protection and dignified protection for all those forced to flee, regardless of their country of origin.

As one of the world’s wealthiest regions, the EU and its member states can and must do better. In response to rising needs worldwide, EU states must urgently reaffirm their commitment to refugee resettlement and prevent programmes from shrinking further.

This is a pivotal moment for states to invest into durable, multi-annual, resilient, and ambitious resettlement programmes, mobilising the unprecedented solidarity towards refugees from Ukraine and elsewhere. Here’s how:

1. Promptly fulfilling their pledges for 2022

EU member states must urgently meet their pledge to welcome over 20,000 refugees in 2022, and their commitment to admit nearly 40,000 Afghans at risk in 2021-22. At the current pace, with only 7,000 refugees resettled into EU member states up to June 2022, we fear that many of these places pledged will be lost. States can kickstart these programmes by employing the innovative solutions developed during the COVID-19 pandemic, for instance by conducting resettlement interviews online rather than in-person, pooling and coordinating resources to make flights or selection missions more cost-effective, investing into additional reception spaces, and leveraging the role of civil society and citizens themselves in hosting and welcoming refugees.

Between now and October 2022, EU countries will be preparing their commitments for how many refugees they will welcome through resettlement next year, with financial support from the European Commission. EU member states must commit to significantly increased pledges for 2023, including resettling at least 40,000 refugees next year, and a minimum of 8,500 places for Afghan refugees in addition.

3. Committing to a sustainable resettlement scheme across the EU

The EU must urgently adopt the Union Resettlement and Humanitarian Admission Framework (URF), which would help create a more structured, predictable and longstanding EU policy on resettlement, and provide an important lifeline for refugees.

Developments on this critical framework have been blocked in the European Council since 2018, as it is bundled into the larger Common European Asylum System ‘package’ of reforms. However, some progress has now been reached on other individual files by ‘decoupling’ them from the overall package. Efforts to advance on specific files must be done in a balanced way, ensuring that measures to strengthen safe routes to protection, such as the URF, are also adopted. This could break the deadlock that has hampered meaningful, coordinated progress on resettlement since 2018.

Learn more about the need for increased resettlement and what EU member states can do to uphold this vital pathway and durable solution for refugees.

#KickstartResettlement: As the next pledging cycle kicks off today, we call on EU states to:

* Fulfill their existing pledges to resettle 20,000 refugees this year;
* Commit to resettling at least 40,000 refugees in 2023.https://t.co/j9poDqOFHspic.twitter.com/OiuYG5lZkm

Share these tweets to honour the immense courage, creativity and contributions of refugees, and call on the EU to open more safe and legal pathways to protection.