What Ukrainians need to survive winter

With no end in sight to the war raging in their country, millions of Ukrainians are facing their toughest winter in recent history.

Approximately 6.5 million people in Ukraine have been displaced and are facing freezing winter conditions after being forced to flee their homes. Many are taking shelter in damaged buildings and have limited access to food, electricity and heat.

Since February 2022, the International Rescue Committee (IRC) has been on the ground working closely with partner organisations to reach people in need. We are scaling up our response as the weather gets colder and are distributing essential winter items, including blankets and heaters.

Learn more about the war’s impact on Ukrainians and people around the world.

How cold is winter in Ukraine?

Winter in Ukraine is snowy and cold, with temperatures reaching well below freezing. During the winter months, which run from December to March, the country has an average temperature ranging between -4.8 C and 2 C. In some regions where the IRC works, temperatures regularly drop to -21.6 C.

Eastern Ukraine has been shaken by conflict since 2014, and the situation in the country has deteriorated significantly since the full-scale war broke out in February. Recent attacks have damaged the Ukrainian power grid, making blackouts a common occurrence.

In a single day in mid-November, intense fighting left more than 7 million Ukrainians without electricity. A lack of power and heat become life-threatening as temperatures plunge well below freezing.

Across the country, 17.7 million people are now in need of humanitarian assistance.

What will Ukrainians need to survive winter?

More funds and immediate assistance are needed to minimise the humanitarian crisis in Ukraine this winter. Ukrainians need access to suitable shelter, health services and clean water to survive.

Millions of Ukrainians have had their homes destroyed by conflict. Now, they’re searching for shelter from violence and the winter elements. Many are staying in buildings that have been damaged by the conflict while whole communities have been left without access to electricity.

“With no power source, and with damage to their shelter, surviving the winter will be incredibly difficult for a large number of people,” says the IRC's Ukraine country director, Marysia Zapasnik.

“It could also result in a dramatic increase in the number of people displaced, as they move to other parts of the country in search of warmth.”

The World Health Organization (WHO) warns that conditions in Ukraine will increase rates of frostbite, hypothermia, pneumonia, stroke and heart attack. Those who do fall ill may be unable to access care; there have been over 700 attacks on health facilities since the war began, with many critical services damaged and destroyed. One of the most recent ones cost the life of a newborn baby. 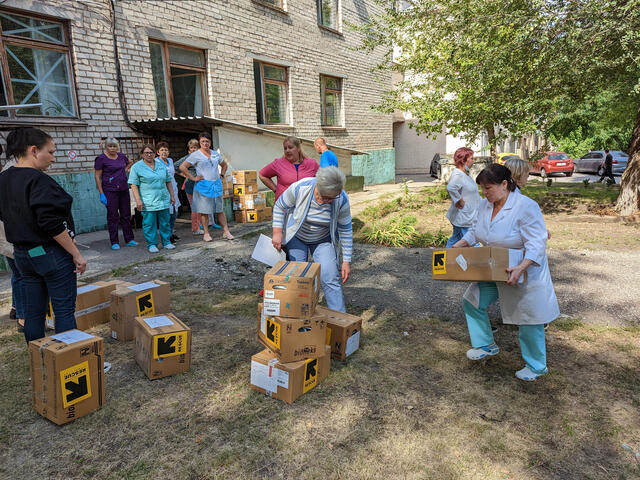 Staff of a medical facility in Zaporizhia, Ukraine work to distribute medical supplies provided by the IRC.

Who is most vulnerable during the winter in Ukraine?

Some 6.5 million Ukrainians are displaced inside their own country. Having fled their home to seek safety from violence, they are facing a new challenge in surviving the winter months.

Displaced Ukrainians were forced to quickly leave their homes, many of them bringing only what they could carry or pack into a car. They are taking shelter where they can find it, often in buildings unsuitable for freezing temperatures. Many who fled earlier this year did not bring cold weather clothing or blankets with them. 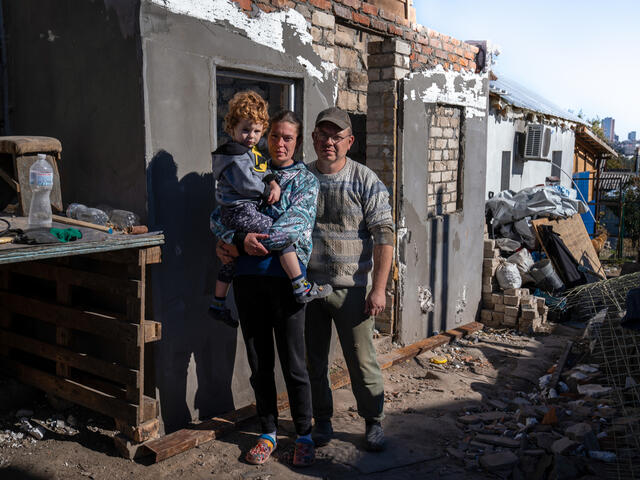 Marina holds her son and stands with her husband, Sergii, in front of their home which was destroyed by a missile strike earlier this year. Marina's family is now displaced and stays in makeshift accommodation.
Photo: Diana Zeyneb Alhindawi for the IRC

Elderly people are also extremely vulnerable to this year’s harsh winter. Elderly people tend to be less mobile and may be physically unable to leave their homes to seek safety. As conflict and winter disrupt the community around them, they often lose access to everyday services they rely on for food and care. Limited electricity and communication services have also made it more difficult for families to take care of their parents and grandparents. At times, they may not even know if their family member is still alive.

“Many staff members from our partner organisations have family members that are living in areas where there is no phone coverage,” says Marysia.

“Sometimes months go by and they don't know if their family members are still alive or not. Then, suddenly, they’ll get a phone call from a friend of a friend who has gone back to that area and has seen that their parents are still alive.”

How will the IRC help Ukrainians survive winter?

The IRC will provide tailored support to meet the needs of Ukrainians this winter, including blankets, sleeping bags, stoves, heaters and fuel. 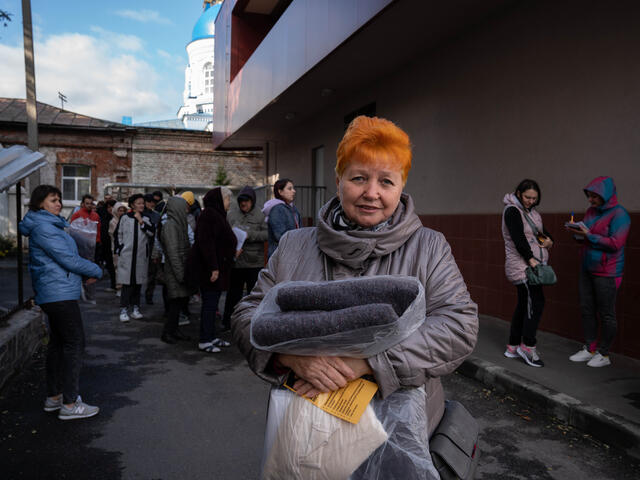 In Eastern Ukraine, a woman holds blankets that her family received from the IRC.
Photo: Diana Zeyneb Alhindawi for the IRC

In areas close to the frontlines, we will provide shelter materials as well as PVC and plywood materials to seal holes in roofs, walls and windows. In areas where businesses still operate, we are continuing our cash distribution program to help families buy the supplies they need to survive the winter.

“We urgently need more funding in order to deliver a sizeable winter response,” says Marysia. “It's a race against time."

Aside from our winter response, the IRC distributes personal hygiene products like toothbrushes and soap, supports health facilities and provides legal consultations to displaced Ukrainians whose homes have been damaged in the war. The IRC and our partner organisations have also set up "safe healing and learning spaces" for displaced children and are working to ensure children are protected and welcomed in the communities where they have sought safety.

Find out more about how the IRC is helping Ukrainians and what you can do to help.

Please make a donation to support our work in more than 40 countries worldwide, including Ukraine.