Why are Venezuelans leaving their country?

Every day, thousands of Venezuelans leave their country in search of safety and stability, many of them arriving in Colombia. The International Rescue Committee has been supporting families in need in Cúcuta, a border city, since April 2018. Recently, the IRC conducted an assessment across the country, and spoke to families to understand their needs. Here is what you need to know about the unfolding crisis.

What is happening in Venezuela?

Venezuela was once the wealthiest nation in Latin America, the beneficiary of the world's largest oil reserves. In 2014, the economy began to collapse. The Bolivar, its currency, has gone into free fall, leaving millions unable to afford even basic necessities. According to Bloomberg’s Cafe con leche index, a cup of coffee today costs the same as 1,800 cups in January 2018. Both food and health care are increasingly hard to come by as supplies dwindle and costs for services skyrocket. Families face a desperate decision: struggle to get by and suffer extreme hunger, or leave the country.

How many people have left Venezuela, and where have they gone?

According the U.N., more than four million people have left Venezuela since the crisis began. One million of those, many lacking official documentation, have gone to neighboring Colombia. Hundreds of thousands more have traveled to Brazil, Peru or Ecuador. It’s expected that these numbers will increase as the crisis deepens; by the end of 2019, there could be two million Venezuelans in Colombia.

It doesn’t matter if you have a lot of material things if you don’t have medicine or food.

“It’s really hard,” says Meli Rondon, who lives with her sons and grandchildren in an informal roadside camp in the Colombian city of Barranquilla. “In Venezuela, we have our own home, our own beds, but it doesn’t matter if you have a lot of material things if you don’t have medicine or food.” 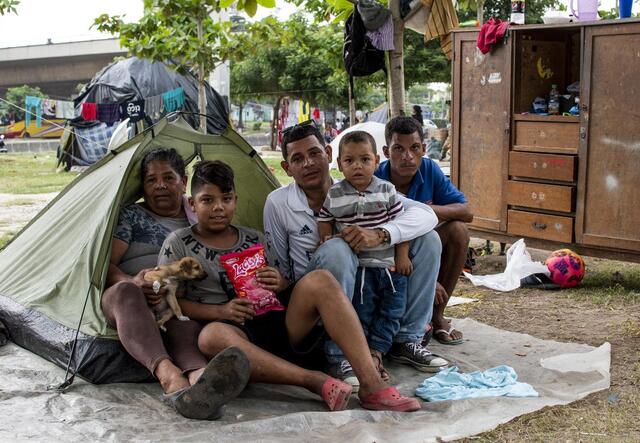 Meli Rondon (left), a chef from Venezuela, now lives by a roadside in Barranquilla, Colombia, with her family. The children sleep inside the tent while the adults sleep out in the open.
Photo: Jessica Wanless/IRC

Why are people leaving Venezuela?

“I decided I had to leave Venezuela for my baby,” reports Carina, a mother of two living in Bogota. “She had malnutrition. She was losing all of her calcium. She lost her fingernails.”

Most Venezuelans leave the country looking for a place where they will be safe and free from hunger. Many seek work to earn cash to send home. Others plan to join family who have already traveled to Colombia and beyond. 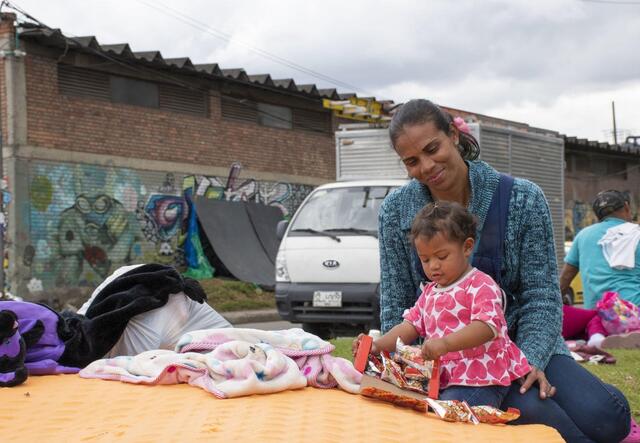 The economic crisis forced Carina to take her malnourished baby girl to Colombia. “When we got here to Bogota people helped us with what we needed. Now my daughter is getting much better."
Photo: Jessica Wanless/IRC

What is life like for Venezuelans who remain in the country?

Supermarket shelves are often empty and people have reported scavenging for discarded food. Angie*, a mother who left for Colombia, told the IRC that, “When my grandma died, we had to bury the body in the garden, because we did not have any money to pay for the funeral.”

Electricity is often unreliable, outages alternating with power surges damaging refrigerators and other appliances. Violence has increased as people grow desperate to provide for their children—or simply to survive. 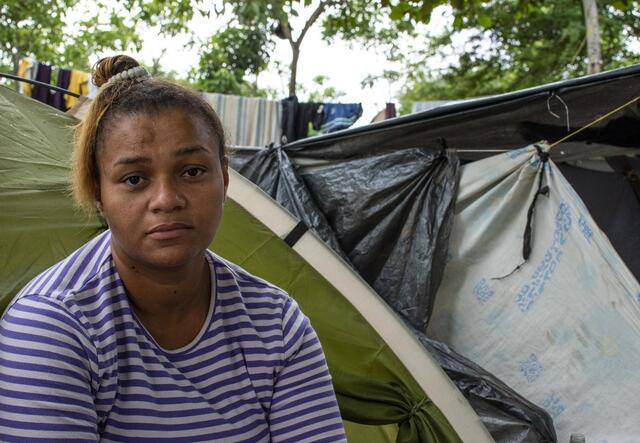 The crisis has left families without enough cash for critical expenses. “When my grandma died, we had to bury the body in the garden," says Angie, who is four months pregnant and living in a tent in Barranquilla.
Photo: Jessica Wanless/IRC

Health care is scarce. Patients needing an operation often have to pay for for their own medical supplies, right down to the rubber gloves used by the surgeon. Many medicines and treatments are no longer available in Venezuela. “Two weeks ago, one of my nephews died of leukemia,” says Carina. “He was 12 years old. He died because there was no treatment.”

“Life here in Colombia is difficult,” reports Karina Gutierrez, a 42-year-old mother of three. Karina and her husband are struggling to find steady work, a common occurrence. Like many Venezuelan families, they are living in a shared apartment. “The rent here is really expensive, so living with other people is the only way to be able to pay all of the rent,” she says. “We met the couple here.”

Life here in Colombia is difficult. The rent here is really expensive.

But there is hope. Karina’s 10-year-old daughter, Geicelis, is going to school. “School here is more difficult than in Venezuela because they teach us a lot more things,” she says. “But it is easier in a lot of ways because, back in Venezuela, it was difficult to get the notebooks and other things that I needed. Often the teachers were not there to teach us.” Adds Geicelis, “I have a lot of Colombian friends at school now.” 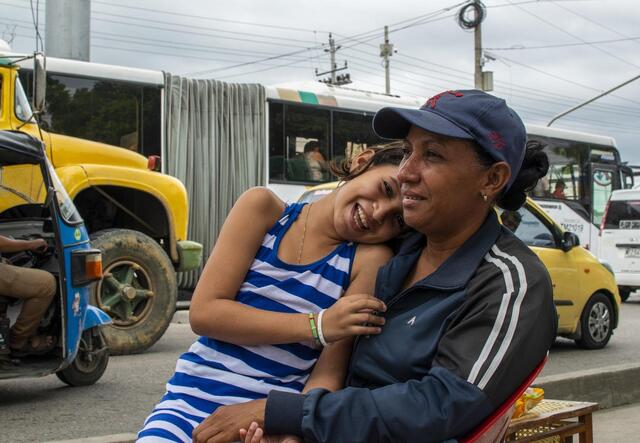 Since April 2018, the IRC has been working in Cúcuta supporting Venezuelans and vulnerable Colombians with specialized services for women and children, cash assistance, and health care. In the coming months, the IRC will be expanding its work across Colombia.

To date, the IRC has reached over 5,000 people in Colombia, including Cibel, a new mother who is receiving cash, attending parenting classes and receiving medical care. “The IRC makes me feel like I am not alone,” says Cibel, who is naming her newborn after Diana, a staff member with the local IRC team. “They are the only ones I have counted on.”