Why Somalia is facing a catastrophic famine

Millons of people in Somalia could be at risk of famine as a severe drought and the Ukraine crisis drive up the cost of food.

The worst drought in decades is ravaging East Africa, destroying crops and driving the cost of food out of reach of many. In Somalia alone, 7 million people (out of a total population of 16 million) could be at risk of famine in the next two months if aid is not scaled up to meet skyrocketing needs.

In 2011, some 250,000 people in Somalia—half of whom were children—died in a famine that followed three consecutive seasons without adequate rainfall. Less than half the aid that donor countries pledged to the humanitarian response was actually funded, making many of those deaths preventable.

As Somalia enters its fifth consecutive season without enough rain, world leaders must step up to save lives. The 2022 humanitarian response plan for food security in Somalia is currently only 20% funded—this at a time the growing impacts of climate change have damaged livelihoods and the crisis in Ukraine has caused the cost of food and the fuel needed to deliver it to spike. As a result, 230,000 Somalis are already living in famine conditions.

Aid delivery has been severely impacted by the 200% jump in fuel and malnutrition treatment costs. “We have had to drastically reconsider our operations due to the sharp increase in prices and fuel over the last few months,” says Hashi Abdi, supply chain manager for the International Rescue Committee (IRC) in Somalia. “When we do not have enough medical supplies in our clinics, we have to turn away the increasing number of patients that are in need of critical care and support.

“This is happening all the more frequently as lifesaving aid is diverted to help Ukraine—leading to an even more drastic reduction in the aid we can deliver.”

The IRC is calling on international leaders and donors to immediately direct funding to drought relief in East Africa to avert looming famine. We are seeing a deeply concerning increase in admissions for acute malnutrition at IRC clinics across Somalia, with one of our nutrition clinics reporting a 265% increase in the number of severely malnourished children under the age of 5 needing treatment (April-May 2022). 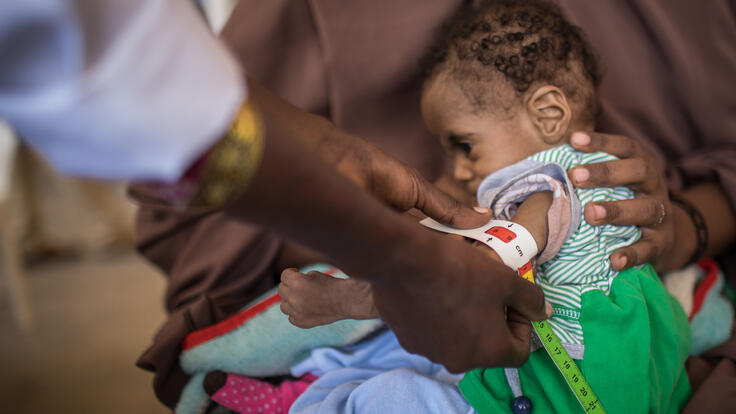 A 10-month-old girl is examined at one of the IRC clinics in Somalia that provide care for malnourished children. The IRC is also deploying mobile health teams to reach deeper into drought-affected areas.
Photo: Kellie Ryan for the IRC

“As ever, this [crisis] is impacting the most vulnerable the most,” says Abdi. “Without immediate international funding, a catastrophic famine is undoubtedly on the horizon for Somalia and the region as a whole.”

How the IRC is responding in Somalia 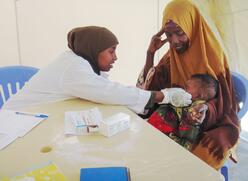 A health worker at an IRC clinic in Somalia examines a baby during our response to the famine in 2011.
Photo: IRC

The IRC began working in Somalia in 1981 in the aftermath of the Somalia-Ethiopia conflict and today are scaling up our support in drought-affected areas including Mogadishu, Puntland, and southwest and central Somalia.

We are providing health care for malnourished children, deploying mobile health teams to reach deeper into hard-hit areas. We are also making cash transfers to help people quickly get the support they need and rehabilitating boreholes and other water sources.

Learn more about the IRC’s work in Somalia.

How can I help?

Drought, conflict and disease rob children of the chance to live full, healthy lives. You can help: Donate today.