A year after Cyclone Idai, survivors look towards an uncertain future

In March 2019, Cyclone Idai swept southern Africa, leaving destruction in its wake. Millions of people across the region were impacted, as the category 4 storm devastated homes, businesses and crops.

Zimbabwe, one of the countries worst hit by the storm, became the focus of IRC’s emergency response. Using drones, the IRC was one of the first organisations to provide initial scoping and images showing the impact on communities in Ngangu Township, which was the epicentre of Cyclone Idai. Even today, the IRC is working to help people recover from the storm’s impact.

Today Cyclone Idai has fallen from world’s attention. Yet for survivors, who are struggling to rebuild their lives, the traumatic memories of the storm remain as vivid as ever. 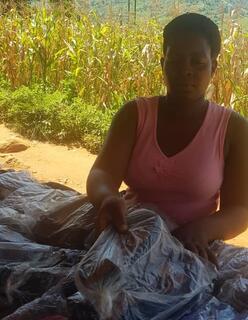 Cyclone Idai left Majiva traumatised. She received counselling and skills training from the IRC, and now she is slowly beginning to rebuild her life.

Majiva recalls her own miraculous escape, as flood waters swept through her village.

“I was almost washed away by the rains but survived through climbing on a tree in which I stayed for almost two days until rescue came. I felt cold, shivering, I was numb,” she says.

When Majiva was finally rescued, she could barely recognise the scenes around her. Her family hadn’t survived, her home was gone, her own life was changed forever.

“It was as if the world came to a halt for a moment. Everything came to a standstill. Roads were inaccessible, shops and vendors stopped selling. There was loss of human lives, livestock, livelihoods. I was personally traumatised, with the loss of my family,” she remembers.

It was as if the world came to a halt for a moment. Everything came to a standstill

Majiva has worked hard to rebuild her life. She received counselling from the IRC, and skills training which helped her start a small business, selling clothes in the local flea market.

Yet the future remains precarious, the prospect of another storm hangs over the community, already haunted by the memory of Cyclone Idai.

“The whole community is still in shock. They are afraid that the disaster might hit us again,” says Morgan, who also lost his family and livelihood to the storm.

Like Majiva and thousands of others in Zimbabwe, Morgan continues life living in an emergency tent. The 45-year-old believes that Cyclone Idai is not a freak occurrence. He has observed changes in the weather and fears about the impact of a changing climate.

“The weather has completely changed here in the past five years,” he says. 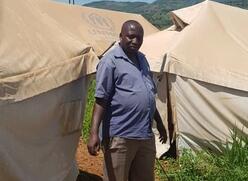 Morgan, 45, stands outside the tent where he lives a year after his home was destroyed by Cyclone Idai.

"It’s now difficult to predict when the first rains will come. We are not used to this extreme weather. The truth is that everything has just changed: the amount, distribution and timing of rainfall, it is all different.”

With support from the EU, the IRC continues to help cyclone and drought-stricken communities across Zimbabwe to build resilience and use early warning systems to prepare and respond to future stresses and shocks.

Despite the challenges, people are adapting and working to become more resilient for the future. Morgan says that his community is already making plans: from planting less water-dependent trees to rebuilding houses in high-areas to avoid flooding.

“We just hope that there won’t be more disasters such as the cyclones and floods in the future.”