The inspirational couple who risked everything to keep their family together

Ask 36-year-old Esther* when she’s happiest and her smile widens as she remembers her favourite time of day: “At 6 o’clock, I come out of my house and see my husband – Simon – walking through the gate to be with me and my children. Seeing him still gives me a rush of adrenalin.”

For 44-year-old Simon, it’s the same: “I’m happiest when I return home from working in the fields and I walk through the gate at 6 o’clock and I see my wife and children. I know there are no problems and I feel very happy.” 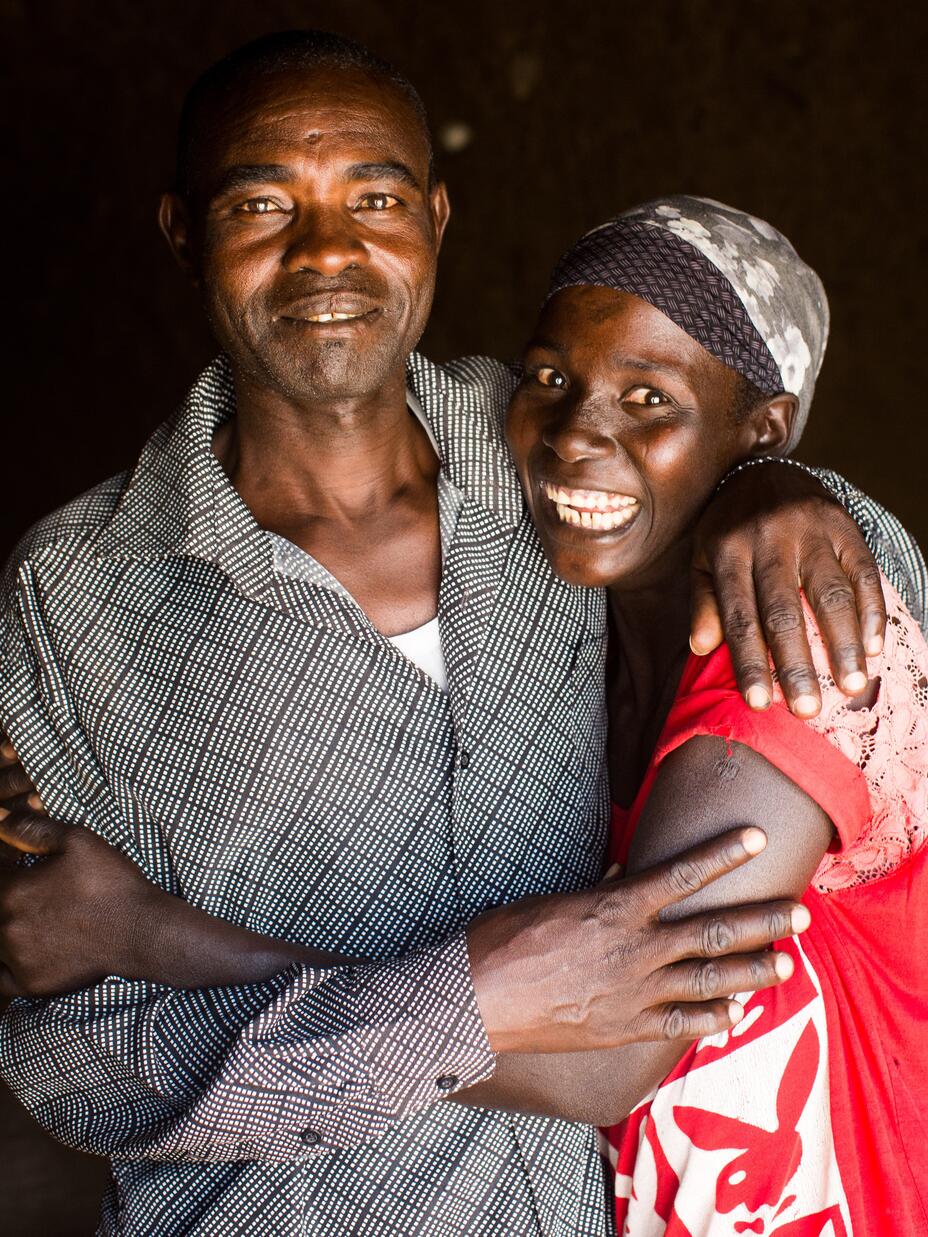 Esther and Simon have been married for ten years, their love for each other has carried them through no matter what difficulties they have faced.
Photo: IRC/Elena Heatherwick

Esther and Simon have been married ten years and have known each other since they were children. It’s clear their marriage is built on a foundation of love and respect: “In marriage, you do all you can to make your wife happy and she does all she can to make you happy. If you live this way it is a reward to be married, and it brings peace between you,” Simon says.

They sit on a patterned rug under the mango tree outside their house in northeast Nigeria surrounded by their four children. 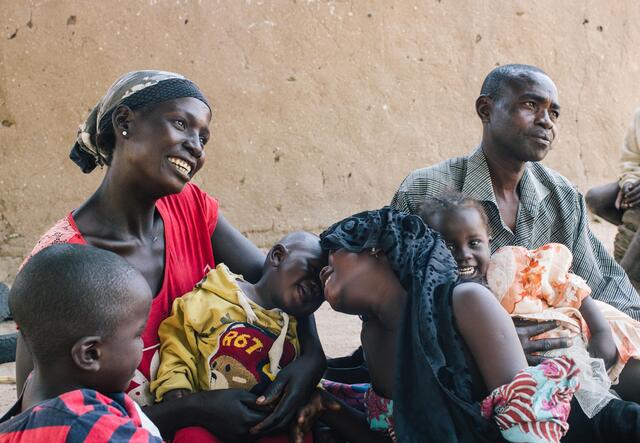 Esther and her family are now able to live in peace - they treasure their moments together after an incredibly challenging time.
Photo: IRC/Elena Heatherwick

Esther is at the centre of the family, her 8-month-old baby, Peter, is cradled in her arms breastfeeding. She sits comfortably surrounded by her loved ones and lifts Peter up to nuzzle into his soft cheeks. Often, the family break into giggles and tease each other.

It’s a harmonious life that they treasure: “One of the most important things is that we are now living in peace,” Esther says.

In 2014, that peace was broken. At the time, Simon was working in Yola, a city miles away, and coming back to spend time with his family when he could.

But on one return visit in July 2014, Esther told Simon that it wasn’t safe for him and that he had to return to Yola: an armed group was killing and abducting men in the area. “I knew Boko Haram was coming and they were looking for men, I told Simon he had to leave,” she says. Simon left the next day. 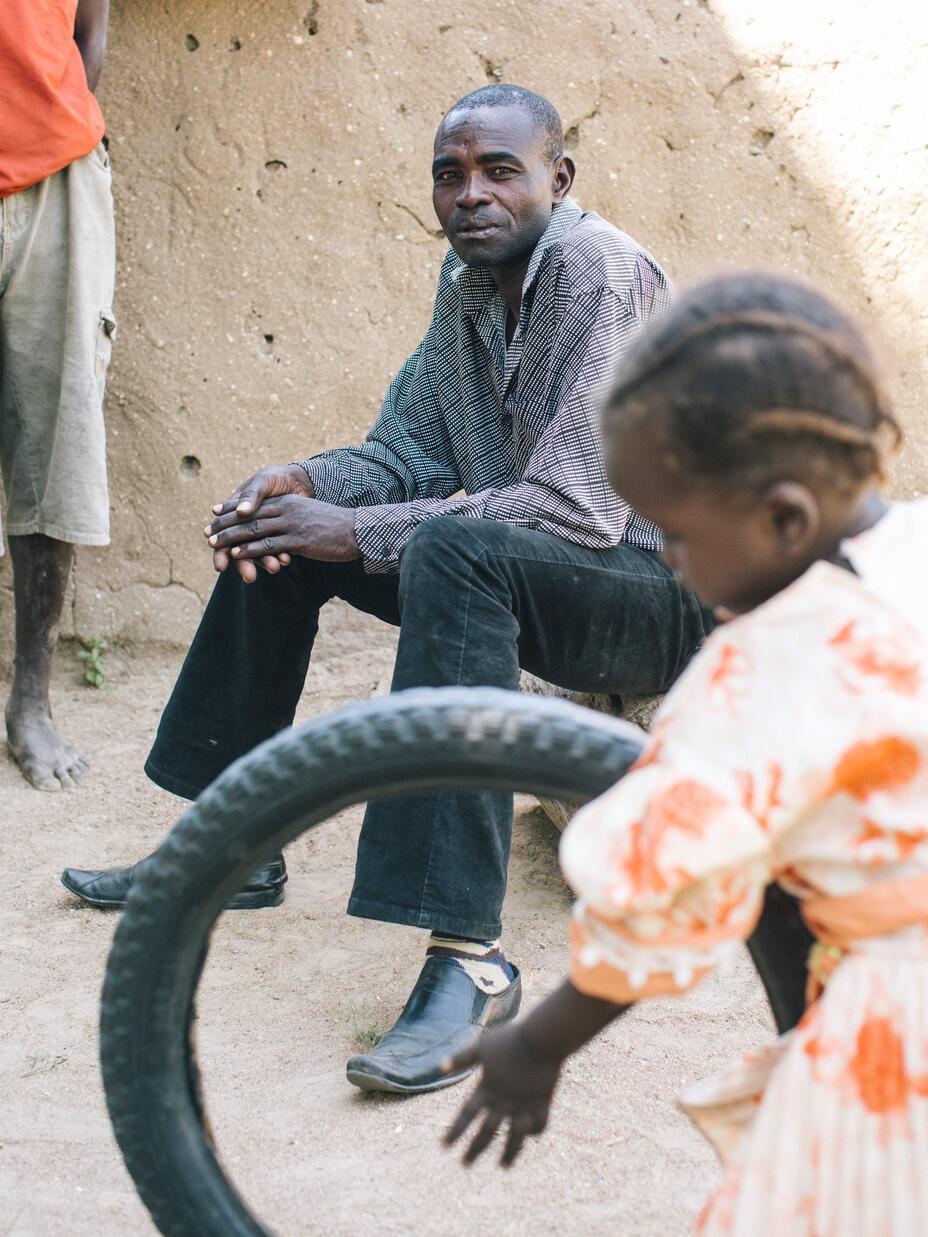 Simon took incredibly dangerous journeys to bring food back to his wife and children when the conflict broke out.
Photo: IRC/Elena Heatherwick

“When the armed men came they took all our food and burnt our houses, we all ran away. We ran to so many places. We’d stop and rest and then hear that Boko Haram were coming and then we’d run again.” Esther explains. “Finding enough food to eat was a real challenge.”

Knowing that his wife and children were struggling to eat, Simon would work in Yola and then make dangerous long journeys in the night to bring them food. He often had to take two cars and then walk to find them.

“I was monitoring wherever my family ran to. It was very dangerous, we took smaller roads going into the bush and then I would look for them. I was afraid that Boko Haram would either arrest and abduct me – or kill me,” Simon says. 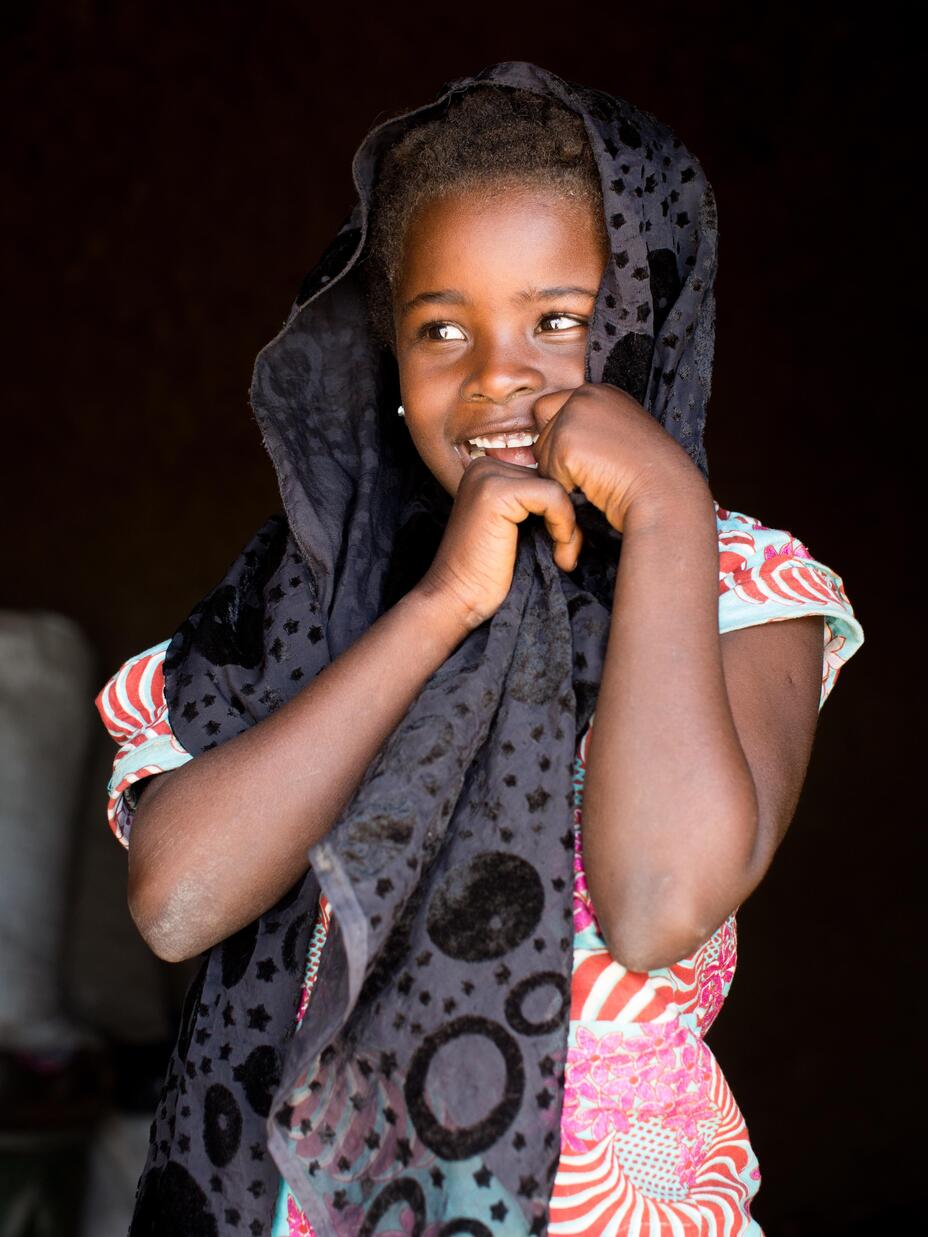 Eight-year-old Sandra is the eldest of Esther and Simon's children and was forced to flee with Esther when the armed men came.
Photo: IRC/Elena Heatherwick

Esther will never forget those short moments of being reunited in the middle of the night. “Sometimes when I saw him coming I would just break down in tears. Sometimes he broke down too. The children always wanted him to stay.”

But Simon could never stay for long. Leaving his children and wife, their faces wet with tears, was always the hardest part of this new life they’d been thrust into.

Almost exactly a year later, their village was safe to return to and the family were able to come home and rebuild their lives. Their unbreakable bond is at the core of their new life as they look to the future.

Both Simon and Esther hope that their children will grow up, go to school and “become something” and describe the immense pride that comes with being a parent. 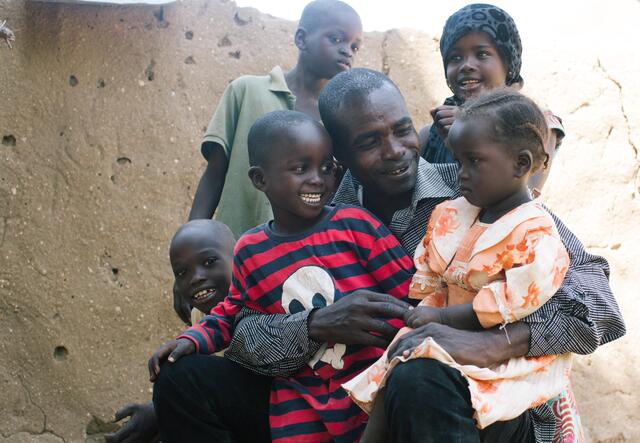 Simon spends every day toiling in the fields to make sure his family have enough to eat.
Photo: Elena Heatherwick/IRC

“Being a mother is wonderful, because you take care of people,” Esther exclaims. “I want to raise my children to be responsible for the community as well.”

Simon is enormously proud of his whole family and works tirelessly to provide for them. “I go out every day and struggle for them and I am happy to do it,” Simon says. He spends every day toiling in the fields. The work is strenuous in the unrelenting sun – but there is nothing that brings him a greater sense of wellbeing than looking after his family. 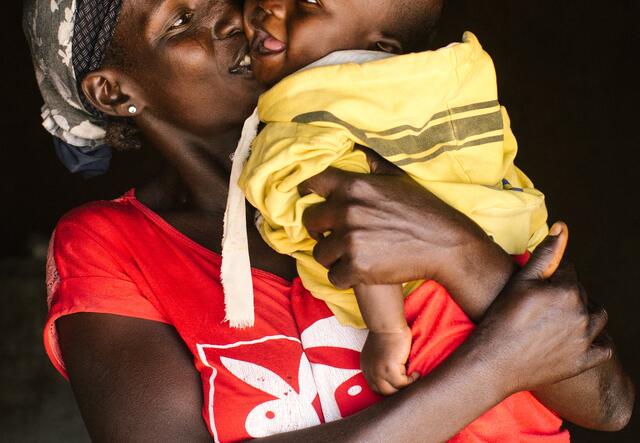 8-month-old Peter is in much better health compared to his brother and sisters when they were his age, his parents put it down to understanding best practices around breastfeeding, which they've gained from sessions with the IRC.
Photo: IRC/Elena Heatherwick

After all Simon and Esther have been through, it is love that has carried them through. “The love we have for each other has helped us through difficult times – and now we have overcome them.”

How we've helped Esther and Simon

The International Rescue Committee has helped to transform Simon and Esther's community. We've improved children’s health by empowering parents with vital information in northeast Nigeria with funding from the European Union Emergency Trust Fund for Africa.

Our sessions improve parents' understanding on topics such as hygiene and nutrition. One crucial aspect of the programme is to inform parents about the importance of breastfeeding exclusively and avoiding giving babies water (which can contain impurities). We’ve seen remarkable results and many babies are now growing up without sickness caused by impure water. Esther and Simon have seen the impact of our work first-hand: after learning about exclusive breastfeeding from the IRC they put this into practice with 8-month-old Peter and told us that he's never given them any challenges.