Rohingya girls are keeping up traditional make-up after fleeing Myanmar

“When I put on senahar, I feel happy in myself. I don’t feel sadness in my heart.”

Nur Kiyas’s process of applying make-up is meticulous, slow and beautiful to watch.

Sat in her tarpaulin and bamboo home in Teknaf camp in Bangladesh, she starts with foundation, smoothing it over her face and lips. Next, powder, brushed gently onto her cheeks and forehead.

Then it’s time for the senahar paste, a traditional type of make-up made of tree bark that people from Myanmar, where Nur Kiyas grew up, have been wearing for thousands of years. 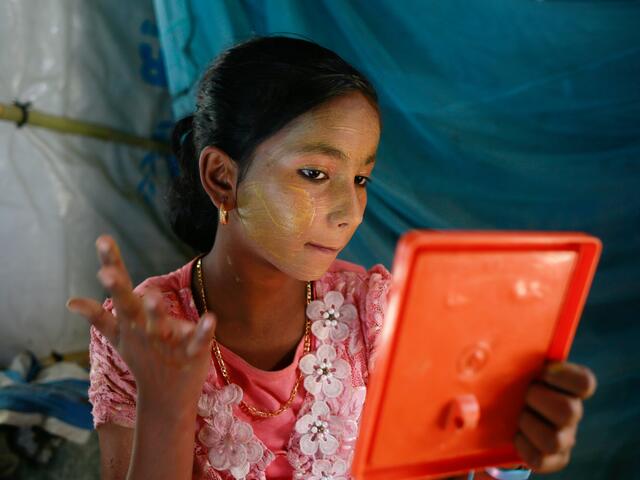 She sits down by a flat stone, used specifically for this ritual, and begins to mix water with the stick of paste. Soon, a smooth blonde liquid starts to appear, and she holds her mirror up to begin to apply. She coats the flat brush in the liquid then flicks it against her cheek, once, twice, three times. After she’s done the other side, she runs her coated finger slowly down her nose in a line to its tip.

She looks from side to side in the mirror, analysing her work, and decides she needs another coat. The brush flicks back into the paste and onto her face.

Next, it’s time for less traditional cosmetics, as she applies pink eyeshadow and lipstick from her prized possession, a fold out make-up kit. 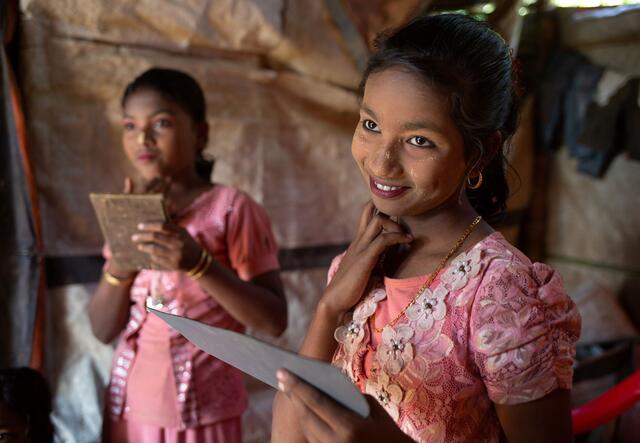 Nur Kiyas lives in the world’s biggest refugee camp with her sisters after fleeing persecution in Myanmar.
Photo: Habiba Nowrose/IRC

“I have been applying senahar for seven years. I wear it every day,” Nur Kiyas says. She relies on her older sisters to purchase the sticks of paste from the local market. “Everyone wears it, we wear it for beauty - our elders wear it so we wear it too.”

Her friend, Hasina, who lives nearby in the same camp, also wears senahar and testifies to it’s uplifting quality: “When I put on senahar, I feel happy in myself. I don’t feel sadness in my heart.”

“We wear this senahar to look beautiful,” Rubijan adds. She spends time with Hasina and Nur Kiyas at the International Rescue Committee’s Women and Girl’s Safe Spaces.

Just like Hasina and Nur Kiyas, Rubijan has been applying senahar paste since she was younger in Myanmar and has taken the routine to the camp in Bangladesh.
Photo: Habiba Nowrose/IRC

In Myanmar, the make-up was so important that they wouldn’t be allowed in school unless they had it on their faces.

Although they were young when they left three years ago, their memories of Myanmar are vivid. Nur Kiyas describes playing with her friends and going to school. Rubijan says she used to pick mangoes off trees and share them with her friends. But these peaceful memories were later replaced with fear and violence. They all vividly remember why they had to flee. 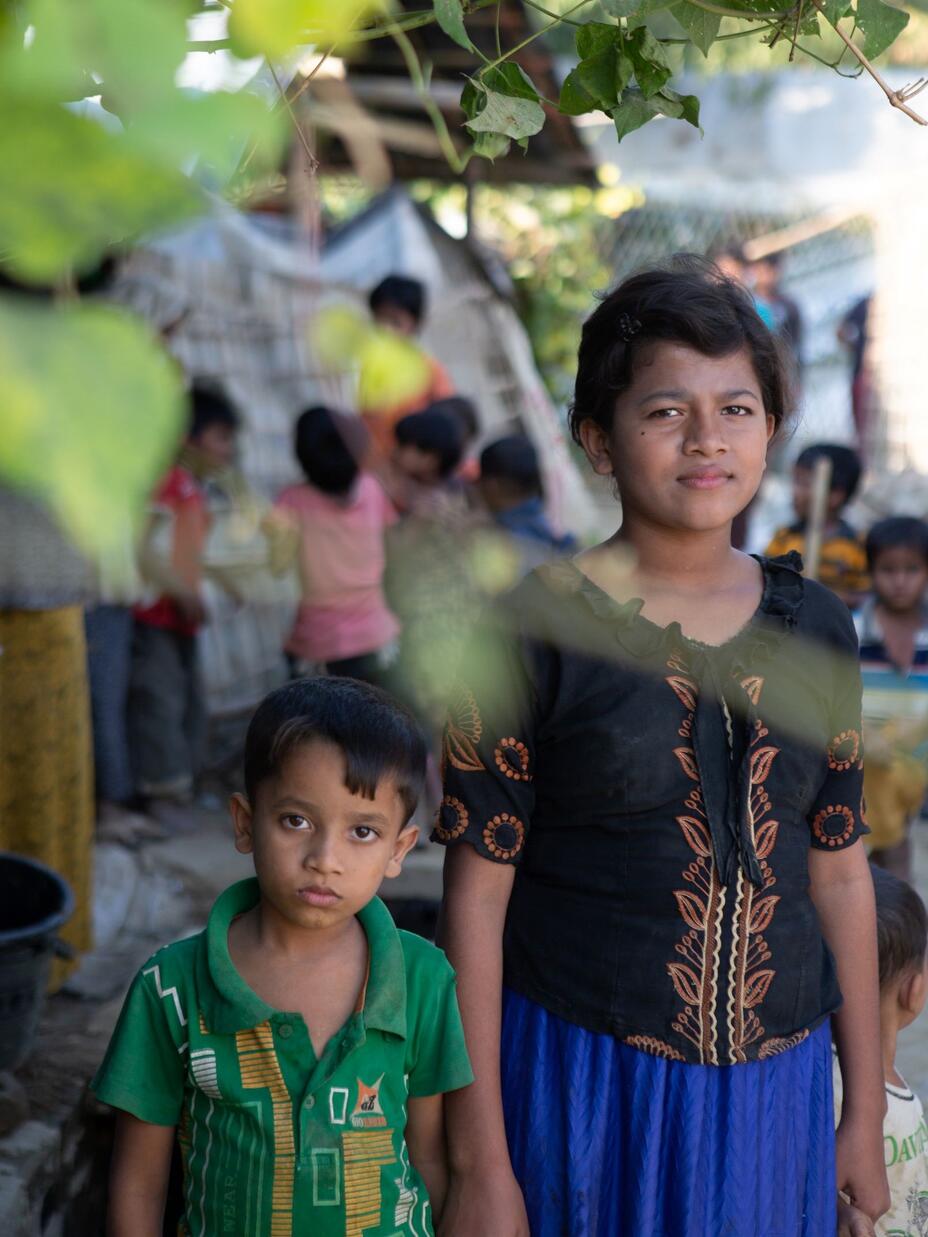 Rubijan stands with her younger brother in Teknaf camp in Bangladesh, a space she shares with thousands of other Rohingya children who have fled persecution in neighbouring Myanmar.
Photo: Habiba Nowrose/IRC

“We had to leave Myanmar because the men fired on us, slaughtered us, killed us by firing,” Rubijan says. “They put them in sacks, cut them in pieces, and put fire on our homes. We had to come here - we ran away because we were afraid of being shot.”

“We didn’t go out on the road alone - if the men came, they would take us away, or they would throw us in canals or leave us on the road dead,” Hasina says, describing the violence. “One time, I went to school with my friends - there, we saw armed men coming, and we were running towards our home. Some other men blocked our way. We jumped into the canal and went to the other side.” 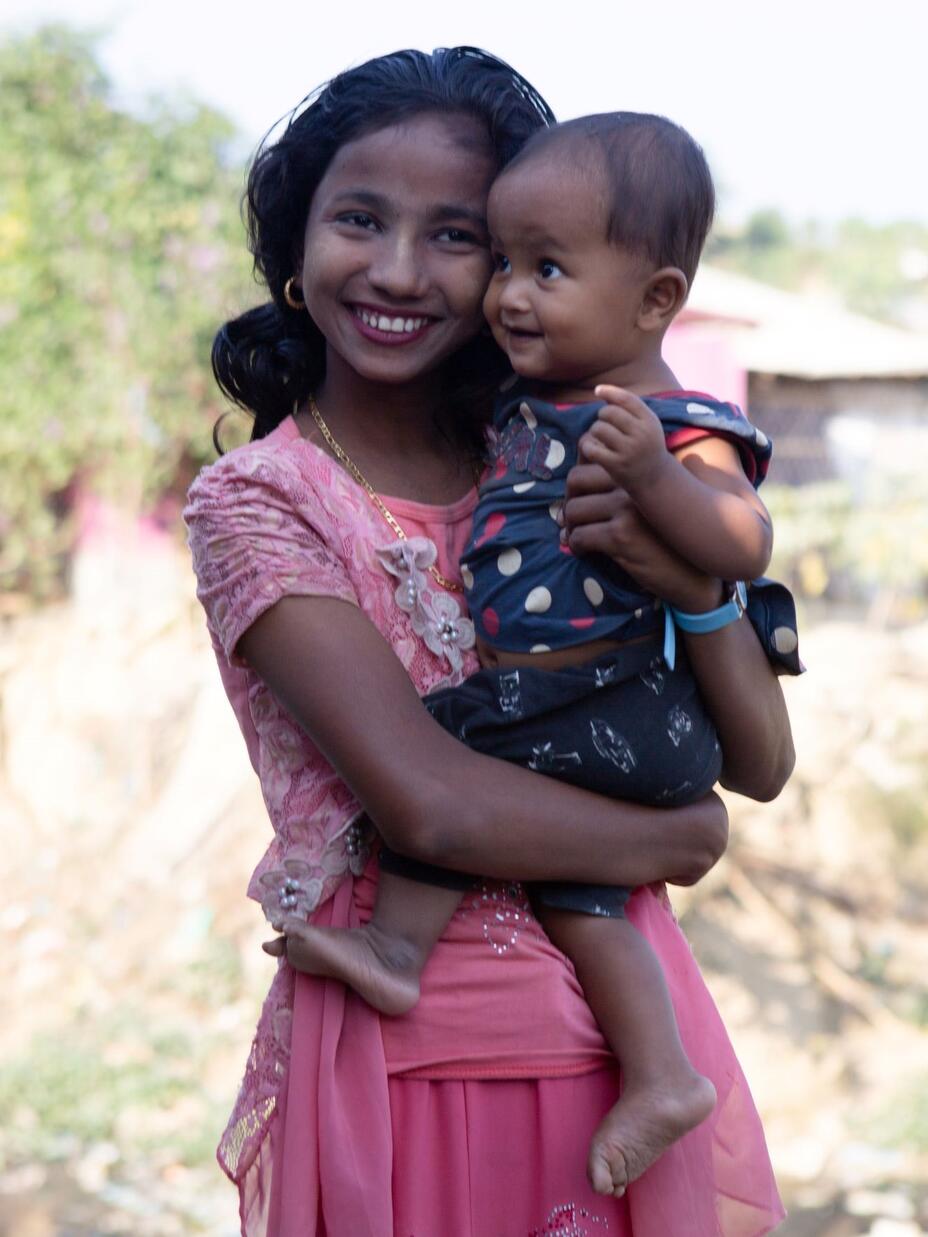 There are many challenges that come with living in such an overcrowded camp - Nur Kiyas describes having to wait in line for hours to get water.
Photo: Habiba Nowrose/IRC

Nur Kiyas remembers her father being taken away during gun fire: “At night there was gunshots when we were at our home. Then when we woke up early in the morning, the men took away my father. Later, me and my mother brought him back. They had beaten him badly, he wasn’t able to move any more.”

These terrifying experiences led each girl and their family to make the long journey to Bangladesh. Rubijan describes walking through rivers “up to her neck” to get here - but that once they made it across the border, Bangladeshi people were waiting with food and clothes. 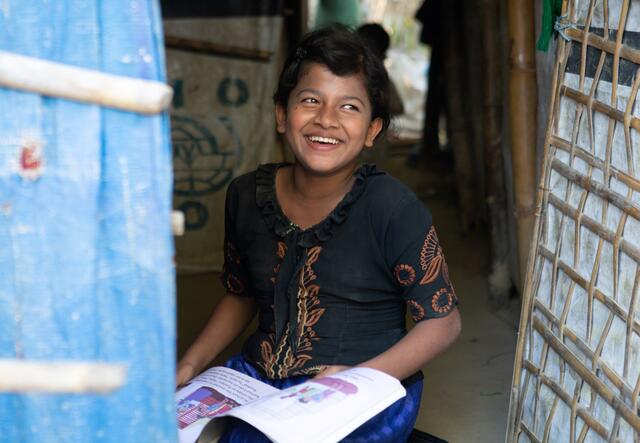 Rubijan has dreams of becoming a teacher when she’s older and she loves learning new things.
Photo: Habiba Nowrose/IRC

They now live in the world’s biggest refugee camp alongside almost one million Rohingya people who have been forced to flee Myanmar. The first case of COVID-19 was recently confirmed in the refugee population in the camps. The overcrowded conditions in the camp, limited water supply and health care facilities mean the conditions are ripe for the spread of the virus.

Girls are often relied upon to collect water and support the family. “Fetching water is difficult. We have to wait in line for so long. Sometimes, if the water supply finishes whilst in the line, then we can’t have water. There is dirt everywhere, chicken faeces, it is very difficult. It would be better to be a boy. Boys can go anywhere for work, they can go to cities, we have to sit in the house. It doesn’t feel easy,” Nur Kiyas explains. 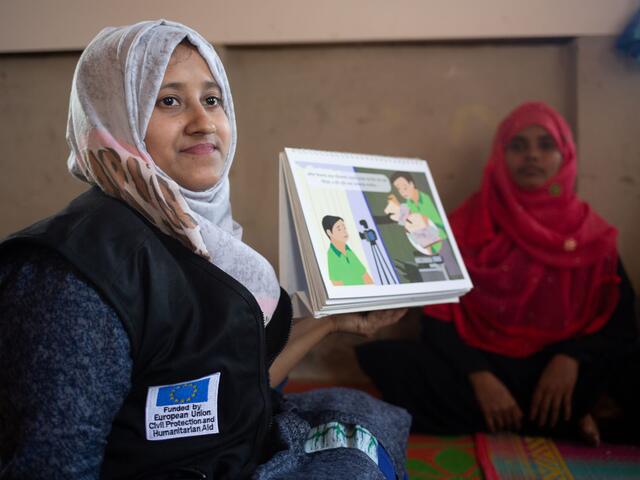 The International Rescue Committee is able to provide crucial information to women and girls in the camp at our dedicated women’s centre, funded by the European Union.
Photo: Habiba Nowrose/IRC

Threats in the camp are not limited to coronavirus for the girls living in the camp. They also remain at constant risk of violence and trafficking.

The IRC’s Women and Girl’s Safe Space, funded by the European Union, provides important respite away from the camp, counselling and information on women’s rights and hygiene. During the pandemic, it’s a place where women and girls can get correct information about how to protect themselves from COVID-19. 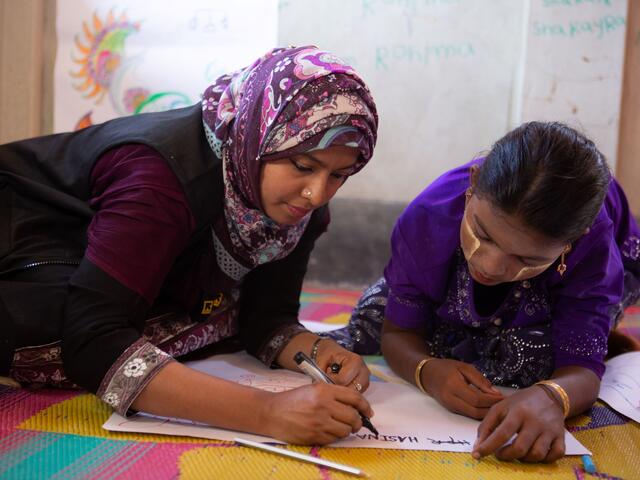 Dilshad is the IRC’s manager at the Women’s Centre. It’s her job to give the girls a space where they can relax, play and learn about their rights.
Photo: Habiba Nowrose/IRC

But for Nur Kiyas, Hasina and Rubijan, it’s first and foremost a place where they can relax, play and express themselves.

“If I stay at home, I’m always feeling sad about Myanmar. I don’t feel like staying in the camp because of the heat of the tarpaulin. Coming here, I can see people, feel happy, I can play,” Hasina explains.

“That’s why I stay here in the Shanti khana [peace centre]. I come here for peace.”